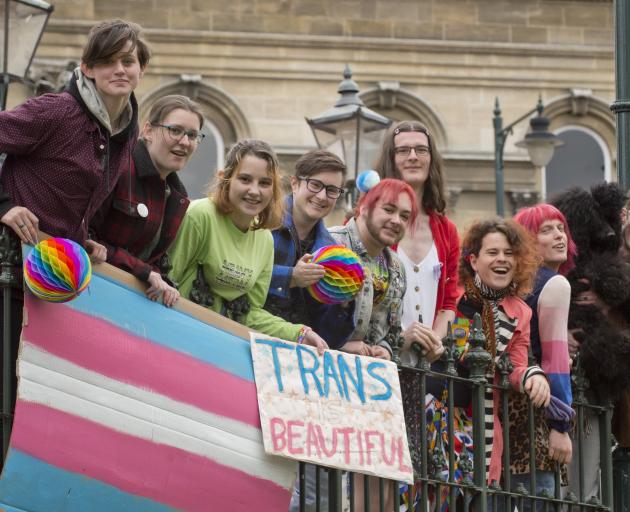 "We’re having this party to push the message that our young people are loved and cared for, and we’ll continue fighting for our rights," Scout Barbour-Evans, of Environmental Justice Otepoti, said.

Messages promoted by Speak Up For Women had a negative impact on the mental health of people within the trans and non-binary community, the activist said.

The event in the Octagon is at 1.30pm, before a 2pm talk by Speak Up For Women about sex self-identification is due to begin at Conference Room 2 of the Dunedin Centre.

Speak Up For Women spokeswoman Beth Johnson said the group respected "protesters’ rights to freedom of assembly, association and speech — we are acutely aware of this, having had to go to the High Court to secure our own rights’’.

The women’s group, formed to oppose the Births, Deaths, Marriages and Relationships Registration Bill, won a case against council officials in Palmerston North.

In Dunedin, the city council allowed, and then cancelled, the group’s event at the library, then approved it at another venue.

The proposed law change would allow people to change the sex, as mentioned on their birth certificate, by statutory declaration, which would be a much less onerous process than getting changes cleared by the Family Court.

The Bill sought to replace biological sex in law with the concept of gender identity, Ms Johnson said.

It will have its second reading in Parliament next month.

The bill being passed is a foregone conclusion. It is disturbing that Speak Up for Women have hit such a brick wall in trying to provide a space their views. Even in this article it gives the appearance that Speak up for Women have power that has to be confronted, when in reality they are a small organisation fighting the might of the NZ Government.

Well said CHANGEIT. A recent study of a large cohort of people in Sweden diagnosed with gender incongruence shows that gender transition, both hormonal and surgical, does not give long term relief from gender dysphoria. In fact, in one measure, those patients who had received gender-affirming surgery were more likely to be treated for anxiety disorders than those who had not received surgery. Long term studies from the UK Tavistock Clinic also do not provide evidence of benefits for most patients. Speak up for Women.

That isn't what the study showed.
It (and other studies) showed that trans people without family support have worse outcomes than those who do have family support.
Every longitudinal study of trans people shows improved outcomes from hormonal and surgical intervention, especially when they had sufficient support. The poor outcomes were easily shown to be related to the prejudice and hate that transgender people still suffer from, even today.

Speak Up For Women have the funds to hire a dozen venues around NZ, pay for flights and accommodation for their speakers, print out glossy fliers, hire massive billboard space in the Wellington CDB, and maintain websites.
They clearly have a LOT of money behind them.
Where is it coming from?

As a radical feminist, I wish you all a lovely party. Radical feminists are not anti-trans but for females having the right to speak up without males being present and defining what a woman is. Identify however you like. But in the interests of safeguarding women and children there need to be some protections against males who would self ID at the drop of a hat just to get access to them.
You say this won't happen. Well we tried having sacred castes of untouchable males such as priests and scout leaders and we learned the hard way that predatory males will go to extraordinary lengths to access women and children.

Most trans people agree with this sane and sensible view that there should be some due process to sex change, it's only the gender totalitarian hard left that wants to silence any balanced and commonsense approach.
Have your lovely party and then get on board with safeguarding for women and children.

That's odd, we already have Self-ID for our two primary forms of photographic ID in New Zealand.
What do you expect will change if people have access to Self-ID for our *weakest* form of identity document?

Speak up for women are about preserving women's rights. I went to their meeting in Wellington found them eloquent and reasoned. At no point during their meeting did they incite anyone to hate or block our transgender citizens. I can't understand why the trans community and their allies are so desperate to silence any conversation about women's rights in this debate.

It's lovely that they sanitise their public meetings, because in their private groups they denigrate transgender women, post their private information, call them mentally ill, and encourage their members to profile trans women on the cyberstalking website that hosted the Mosque shooting video.
How is that preserving women's rights?

What rights are they missing? There's already the right of recognition for fully transitioned people and on secondary ID, the problem is the bill will remove all barriers and the right of women and men to sex-based protections in law as a result.

Sex isn't a mention on the birth certificate, it's a fact at birth same as date, parents and place of birth. It's very difficult to see what this alleged mental harm is, it's a fact your mother was female and that fact is what is recorded on birth certificates. Says a lot that is controversial view today. It's more about shutting down debate, demonising SUFW seems to have worked quite well to distract from discussing the bill itself and the impact and the media have bought into it.

"Sex isn't a mention on the birth certificate"

Are you from New Zealand?
Sex is listed as a category on New Zealand birth certificates. If you were from our country and looked at yours, you'd know that.

The event had an amazing turnout - hundreds of trans positive supporters to the 30 attendees of the SUFW event.
This is proof of how little support that SUFW have in Aotearoa.
#TransWomenAreWomen!