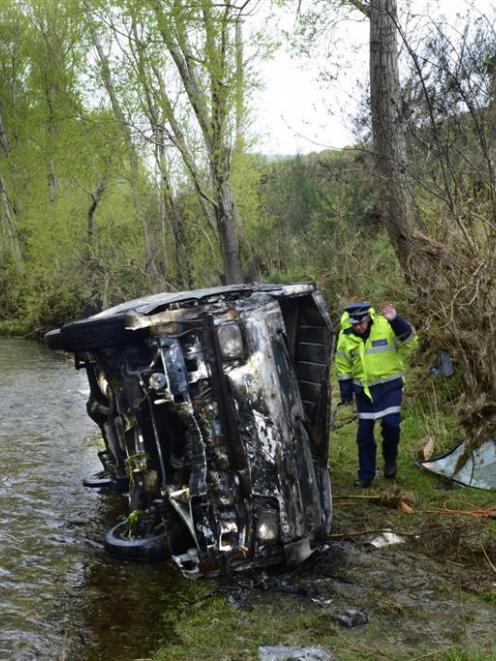 A police officer inspects the burnt wreckage of a van, which ended up in Silver Stream near Mosgiel after the driver lost control in Stedman Rd. Photo by Gerard O'Brien
A trio of quick-thinking Fonterra workers pulled a semiconscious woman out of a van which later burst into flames.

The men were returning to the Mosgiel coolstore when they saw a van plunge down a bank and into the Silver Stream just before 10.30am.

One of the men, Chris Kennedy, said they contacted emergency services and then went to help the only occupant, a 32-year-old Dunedin woman.

"We got her out of her seat belt, as she was sort of hung up across her seat," he said.

"She was just coming to, and we think she had knocked her head as the car rolled down the bank three times. She was in shock and very upset and may not even remember we were there."

Mr Kennedy, Rory Quarrell, and Jesse Free sat with the occupant near her van, which was resting on its passenger side in the riverbed, "until we realised [the van] was on fire and we got her out of there".

Before emergency services arrived, the woman was treated by a paramedic at Helicopters Otago.

Mr Kennedy said if the men had not been driving behind her at the time of accident, no-one would have seen the vehicle until "it was up in flames".

Although high winds were buffeting the area at the time of the accident, snow and ice were not a factor.

The woman had expressed thanks to the men via another colleague who works at the Mosgiel site, and they may meet, Mr Kennedy said.

"It's a bit of goodwill, and maybe some karma coming our way," he said.

Inquiries as to the cause of the crash are continuing.