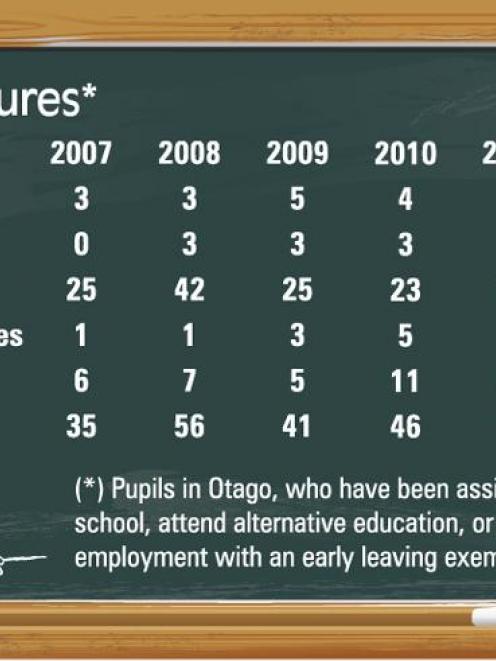 Concern is growing among Otago principals over the increasing amount of truant pupils requiring Ministry of Education assistance to be returned to some form of meaningful education.

Ministry of Education figures released under the Official Information Act reveal the number of truant pupils in Otago who have been assisted to enrol in a school, attend alternative education or start a course or employment with an early leaving exemption has nearly doubled in the past five years.

The number of pupils in Dunedin schools was also increasing, and accounted for more than half of the Otago total.

Figures for 2012 are not yet available.

"We've got to be concerned." Pupils had become "disengaged" from mainstream education "for myriad reasons" and were putting pressure on alternative education resources.

"Without alternative education, these pupils wouldn't be in any meaningful education at all. It's crucial.

"But it is a finite resource. We could always do with more alternative education resources.

"There's a waiting list for pupils wanting to do alternative education in Central Otago.

"We're doing the best we can with what we've got."

Mr Russell said he was not sure what was causing the numbers to increase.

"The reasons could be wide and varied. There will always be individual circumstances in every case.

"The other problem is that pupils from other parts of the country are coming south and taking alternative education spaces here in Central Otago.

"We have a much more transient population now." He believed the situation was also a societal issue.

"We have to look at why this is happening. There may be no easy answer to this," he said.

However, he believed they could reflect the increased work being done to get "out-of-school pupils" back into appropriate education programmes.