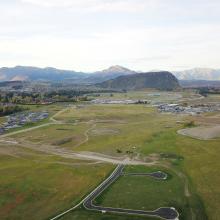 Three Parks. ODT file photo
The Ministry of Education has named the members of the establishment board of trustees for Wanaka's new $16million primary school, to be located on the Three Parks subdivision.

Cleave Hay will support the board as a governance facilitator.

The board's first meeting will be held on June 14.

The names were provided to the Otago Daily Times by Ministry of Education deputy secretary sector enablement and support Katrina Casey who refers to the school as Wanaka South Primary.

Ms Casey said the first meeting would be an opportunity for trustees to ``determine the different skills and experiences of its members, and understand [the board's role] in greater details''.

``An early priority will be to elect a chairperson and work with the governance facilitator to draft a project plan that will identify the tasks it will need to complete to ensure the school will be ready to open in 2020.

``There will be opportunities throughout the establishment process for the community to feed into the development of this new school,'' Ms Casey said.

Construction is due to begin late this year on a 3ha site between the new Wanaka Recreation Centre and Ballantyne Rd.

A ministry design team will work with the establishment board.

The school's first stage will cater for 400 pupils, and a second stage, for another 400 pupils, could be added later.