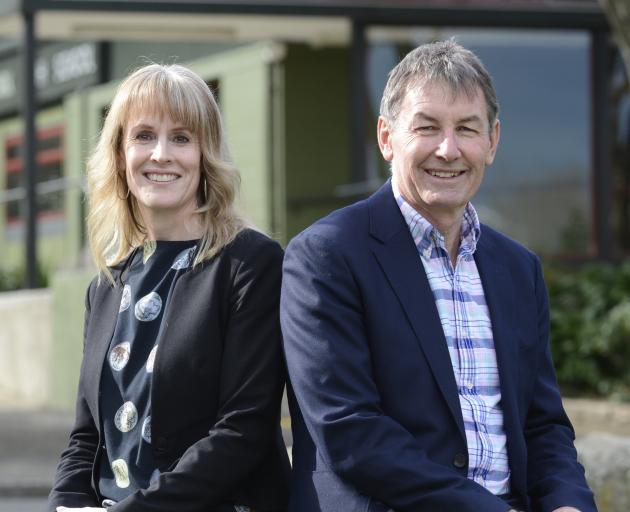 They say too many cooks in the kitchen can spoil the broth - or possibly worse - given the number of sharp and hot objects lying around.

But Peter Hills and Kristan Mouat are adamant two heads are definitely better than one when it comes to school leadership.

It's been a year since the duo were appointed co-principals of Logan Park High School, and it has proved so successful, more than a dozen secondary schools around the country have been in touch, asking questions with a view to implementing the dual leadership system at their school too.

Mr Hills joked it was now possible to market the school as having a "two-for-one" deal.

But in all seriousness, he said the system was producing major benefits for the pupils, staff and parents, as well as for Ms Mouat and him.

One thing that had proved most important, was that they shared the same vision and philosophies about the future direction of the school.

"If you were an ego on feet, it would be difficult because it would be my way or the highway," Mr Hills said.

Ms Mouat said their greatest discovery was recognising each other's strengths and playing to them.

"We share quite a lot of roles but there are certain things that I definitely respect Peter's expertise in."

"There are some things that Kristan is far more in tune with than I am.

"If we duplicated everything, we would be doing twice as much work."

The greatest benefit of the co-principal leadership system was they were able to bounce ideas off each other when difficult decisions needed to be made, Ms Mouat said.

"It can be little things like if someone's done something wrong, you can share ideas about how we are going to treat them.

"We can ask each other: `Are we being objective about this or are we being emotionally affected?"'

Mr Hills said they were only human, and like everyone else, they made mistakes.

"Thankfully, we don't often make the same mistake at the same time."

He said another benefit of dual leadership was that it spread the stress load of the job.

"You don't feel isolated. Sometimes you'll have to make some hard calls and you're going to disappoint people, but it helps having someone else to check what your intentions are and work out if it is the best decision for our students and our staff.

"I feel for any school that's got a single person responsible for everything."

Perhaps the greatest benefit of having two heads, was they could give more time and attention to certain aspects of the job, Ms Mouat said.

"You're equally accessible to parents, staff and students. There's always one of us available."

A lone principal may struggle just to get "the necessities" of their work done each day.

The duo said there had been a couple of occasions when both were passionate about issues affecting the school and they had differing views about how to resolve them.

But they had always been able to come to an agreement. Communication was key, Ms Mouat said.

"Sometimes we'll say `let's go home and think about it' and we'll come back to it tomorrow because my starting point is here, and yours is over there.

"I definitely feel there are many more advantages than disadvantages because you've got two brains feeding into every decision, and they've got different strengths."

She said the school's and community's response to the dual leadership had been "absolutely overwhelmingly positive".

"We would recommend it to everyone.

"It's a much more collaborative, consultative and distributive style of leadership.

"It's about building that capacity and capability in all of our team, so that all of our teachers are also leaders ... It shouldn't necessarily be too hierarchical.

"If either of us is away, the school will continue to run because we have shared values and shared vision."

Some may ask why the system is any different from a principal-deputy principal working relationship.

Mr Hills said a parent could easily answer that question.

"When something goes wrong, who do parents want to see?

"This way, they can see either of us and they can feel respected by both of us."