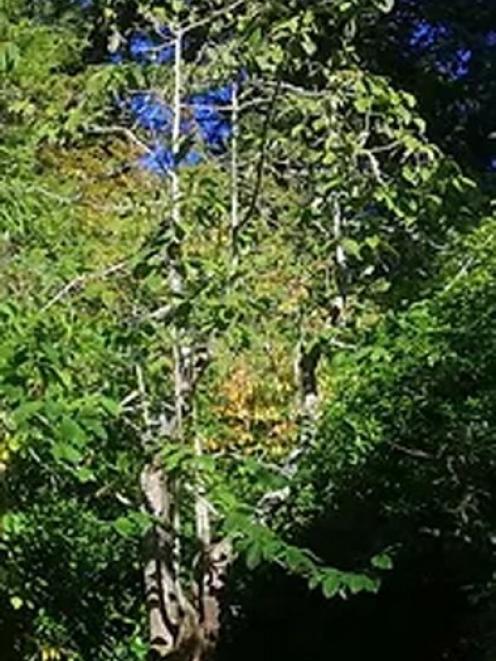 The Seacliff magnolia tree at Truby King Reserve, which featured in the writings of New Zealand author Janet Frame, is a finalist in the Tree of the Year New Zealand competition. PHOTO: RIMU TANE
A small, unassuming magnolia tree, tucked away in the overgrown Truby King Reserve at Seacliff, has been named one of six finalists in the inaugural Rakau o te tau Tree of the Year Aotearoa competition.

What the magnolia may lack in size, it more than makes up for with the story it helps to tell.

It is referred to in Janet Frame’s book Faces in the Water, which talks about mental illness and life in an asylum.

Below the tree is a brass plaque with an extract from the book:

"... the others too old or too ill, who had not been out walking, looked up dully as we entered with our cheeks pink, excited with what we had seen — the pigs, the calves, the doctors, washing on the line, the magnolia tree (the pride of the hospital) in bloom. And we had been to the gate, to the cattle stop at the gate!"

Frame, one of New Zealand’s great authors, spent time at Seacliff as a committed, voluntary patient in the late 1940s and early 1950s.

The Tree of the Year competition, led by the New Zealand Arboricultural Association, will be launched today and New Zealanders are invited to select their favourite from the shortlist of six much-loved trees around the country.

Competition founder and Delta arborist Rimu Tane said community participation was the key to enhancing understanding of how important trees were in our lives.

"We want people to get together with their hapu, iwi, family, kura or community to tell us why these trees are important to them and to show us that they are the guardians of the next Rakau o te tau Aotearoa."

Mr Tane said the magnolia had been selected as a finalist because the tree was located in the historic grounds of the former Seacliff Psychiatric Hospital in the Truby King Reserve, and had provided beauty and a sense of relief for many of the patients of the hospital, including Janet Frame.

"We want people to nominate and vote for trees that play a part in our lives, our history and our future."

Voting closes on May 31 and the winning tree will be announced on June 5 — New Zealand Arbor Day.