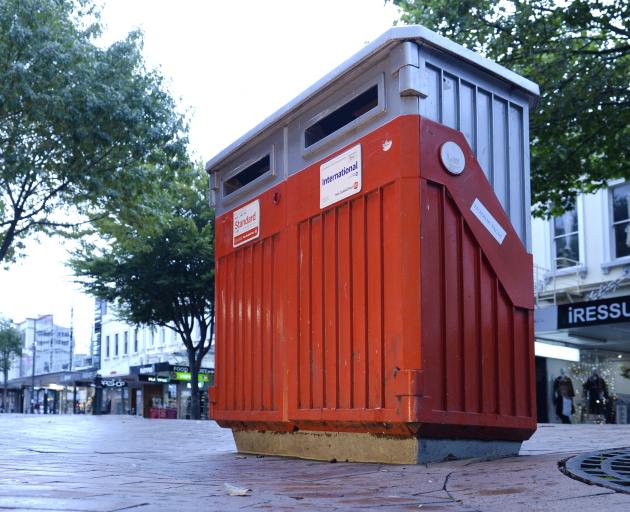 The postbox at 266 George St whose contents remained uncollected for a month. Photo: Gerard O'Brien
Dunedin postboxes have given the term "snail mail" a fresh emphasis.

New Zealand Post is investigating how it failed to collect mail from two central city locations in February — resulting in a buildup of 1700 undelivered items.

Peter Schwartz, an associate professor of medicine at the University of Otago, had posted 11 separate envelopes containing cheques for payments to different charities around the country.

However, when after two and a-half weeks he had not received any donation receipts, he contacted one of the local charities.

It was then he discovered not a single cheque had been received by the intended recipients.

"I then contacted NZ Post, who set up an investigation, and I provided all the details of what was sent, to whom, and where and when all the envelopes were all posted."

Subsequently Prof Schwartz was told, in two separate emails by NZ Post, they were unable to locate the problem.

"All along I said to them that it was hard to imagine how they could lose all 11 items from a single mailing."

Last week he cancelled the payments on all 11 cheques.

He described it as a waste of time.

"[It was] something of a nightmare performance that I had thought at the start was going to be a simple matter of posting some cheques."

The debacle also had a detrimental effect on the owner of a retail shop in Hanover St.

The man, who did not want to be named, dropped a number of invoices in the mailbox.

He said his business will subsequently not receive payments until April.

Dunedin mother Mary Bedwell was concerned her son’s scholarship application could miss a deadline because of the neglected mail.

Another woman said another NZ Post box, inside the Golden Centre, in George St, appeared to be "jam-packed".

"I went to post a card and felt a solid mass of mail inside... and I wondered how long it had been like this."

NZ Post regional service delivery manager Murray Rei apologised for the error and confirmed the boxes "were not cleared properly for the month of February".

"We are investigating why this has happened and to make sure this does not happen again, but we do know this is an isolated incident.

"There are electronic records available indicating that the boxes had been cleared that will be taken into account in the investigation."

NZ Post is contacting some of the senders, he said.

"The mail boxes have now been cleared, and the approximately 1700 items inside will now be delivered."

Wow, there's potential for a 'Sliding Doors' type movie based on this story. With Jermaine Clement as the hapless boss of NZ Post.