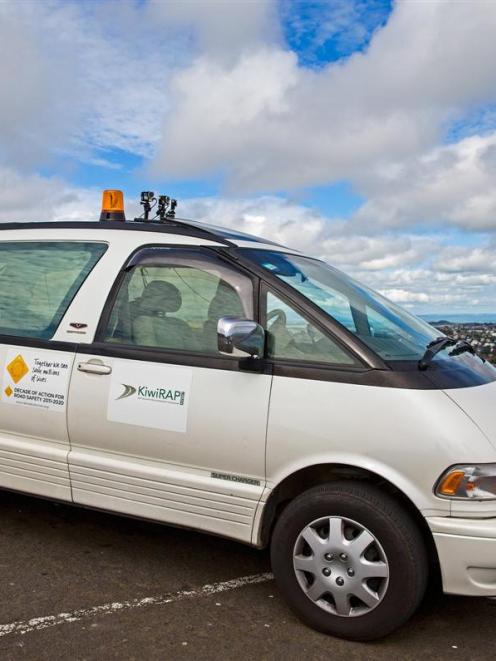 The KiwiRAP Urban camera van, operated by a China-based company, will soon be sweeping Dunedin's streets looking for potentially dangerous spots. Photo supplied.
Dunedin's roads will be under the spotlight next week as part of a push to save lives.

Council senior traffic engineer Ron Minnema said the footage would identify the hazards on each street, from narrow lanes and shoulders to poor visibility and roadside power poles, ditches and trees.

The footage would be correlated with crash statistics and other data to give each road a rating on a five-star scale for motorists, pedestrians and cyclists, he said.

The lowest-scoring roads could then become priorities for future investment by the council, as it sought to target spending to where it could be applied most effectively.

The city's crash statistics were among the worst in the country - albeit with some signs of improvement - so the benefits could be ''huge'', Mr Minnema said.

''We don't want to have one-star roads, because if you run off there, you could die.

''We can't afford to build everything [to a five-star level], so it's [a question of] how do we reduce the risk at a reasonable cost on the highest-risk roads?''

The van was due to arrive in Dunedin tomorrow and would spend the week cruising more than 100 stretches of road, covering about 200km in total, Mr Minnema said.

That included the high-volume tourist route to Taiaroa Head - comprising Portobello and Harington Point Rds - and others, such as Taieri Mouth Rd and Coast Rd to Karitane.

Urban roads, including Portsmouth Dr, Kaikorai Valley Rd and Andersons Bay Rd, would also be points of interest, as well as the city's one-way street network, he said.

The initiative was a response to the Government's Safer Journeys strategy, which aimed to create a roading system free of serious injuries and deaths by 2020.

The New Zealand Transport Agency - which has used the technology on the state highway network since 2008 - had encouraged councils to follow suit.

As a result, Rioh was contracted by Auckland Council, and in turn signed up the Dunedin, Tauranga and Christchurch city councils to participate in the first batch of work.

The DCC's share of the programme's cost was expected to be up to $25,000, Mr Minnema said.

Results were evident on the state highway network, where improvements identified as part of the programme had resulted in a 30% reduction in fatal and serious crashes in the following five years.

''This is another tool to help us to focus on those high-risk areas, where we can probably hopefully realise those benefits.''