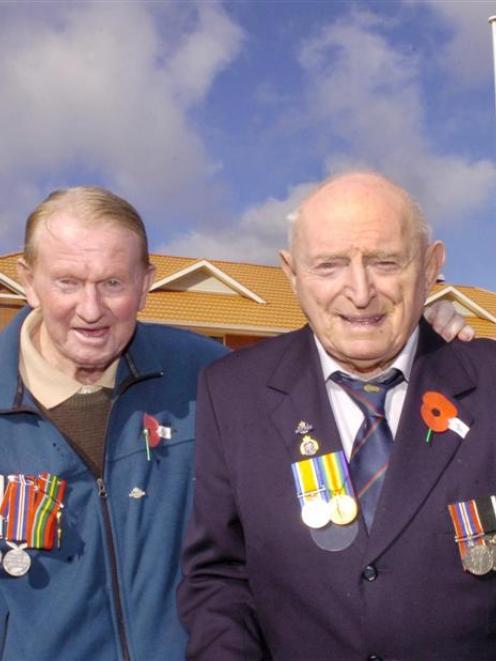 World War 2 buddies Ralph Caradus (83) and Phil Smith (86) reminisce over old times following the Anzac Day service at Montecillo Veterans Home and Hospital. Photo by Jane Dawber.
While there was not much to smile about on the battlefields during World War 2, Phil Smith takes pride in the fact that when soldiers did find reason to bare their teeth, he had helped make them shine.

The 86-year-old Montecillo Veterans Home and Hospital resident was a dental assistant with the New Zealand Dental Corps.

By his own admission, it was not his first choice of service to his country.

He wanted to be like his father, Lawrence Smith, who served in France during World War 1.

His father survived the war, albeit with lasting effects from being gassed on the frontline, and forbade Phil from enlisting in World War 2.

Despite his father's wishes, it was a bad case of pneumonia and poor vision in one eye which meant Mr Smith did not qualify for frontline service when he did try to enlist.

So he spent the war travelling to New Zealand's military bases, filling soldiers' dental cavities before they were shipped offshore.

"I made sure they had nice bright smiles on the battlefields. There would be nothing worse than going off to war with a toothache. Conditions were bad enough without that."

Some may say Mr Smith stepped into the enemy's camp when the war finished.

Rather than become a dentist, he decided he had seen enough dental cavities to last a lifetime and became a confectionery maker for Heards, McIntosh, and later, Hudson and Erskine Confectionery in South Dunedin.

"I loved making lollies . . . especially at Hudson's. I used to make walking sticks out of candy by hand, just like this one," he said, waving his walking aid.

For Mr Smith, Anzac Day was a time to remember his father and to sit in the sun and bask in his freedom with his own World War 2 buddies.