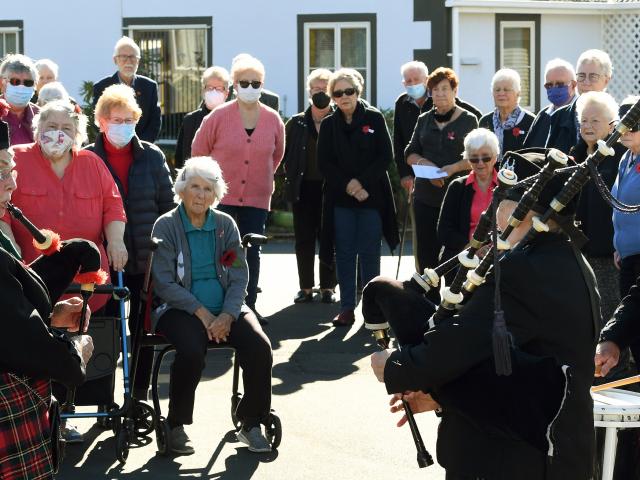 It is not always easy to make it to the Anzac Day dawn service, which is why a pair of bagpipes could be heard coming from a Dunedin residential village later in the morning.

Dunedin families stood together in spirit, but apart in distance, at dawn on Anzac Day - not forgetting those who served the country.

The Returned and Services Association (RSA) has made the decision to cancel any public Anzac Day events this year and is postponing its national Poppy Day appeal.

As the Turkish soldier lay dying, his friend from a neighbouring village, Murat Ali sat to comfort him in his final moments.

Two Balclutha women have been formally invited to take part in the wreath-laying ceremony for Anzac Day in Rome, in Italy.

Kaka Point residents have been meaning to install a permanent flag pole at the local Anzac memorial site for years and finally got around to it this year.

Thousands of people attended the dawn service in Dunedin this morning.
The Government says up to 2000 places will be open to New Zealanders to attend Anzac day at Gallipoli for the 100th anniversary in 2015.

Now is an opportune time to ask about the meaning of Anzac Day and how it ought to be commemorated, writes Tim Pettengell, of Dunedin.

People mark Anzac Day around Otago.
A man has been arrested for stealing a bag of trumpets belonging to a military band at an Anzac Day service in Christchurch this morning.
Thousands packed around the cenotaph for the Anzac Day dawn service at the Auckland War Memorial Museum this morning.

Wars are glorified and imbued with myths to justify continued participation in them, Prof Richard Jackson told a forum on war remembrance at the University of Otago yesterday.

It's an old and battered little blue book, held together by pieces of string and sticking plasters.

It is no surprise a clear majority of New Zealanders say Anzac Day means more to them than Waitangi Day.

Scouts Cailyn McConnell (10) and Tristan Hurndell (15) wrap some rosemary (for remembrance) in red paper (to signify the poppy) to make Anzac posies yesterday.

A lost memento commemorating a World War 1 soldier has been reunited with his descendants, after it was discovered during alterations to a Taieri home.