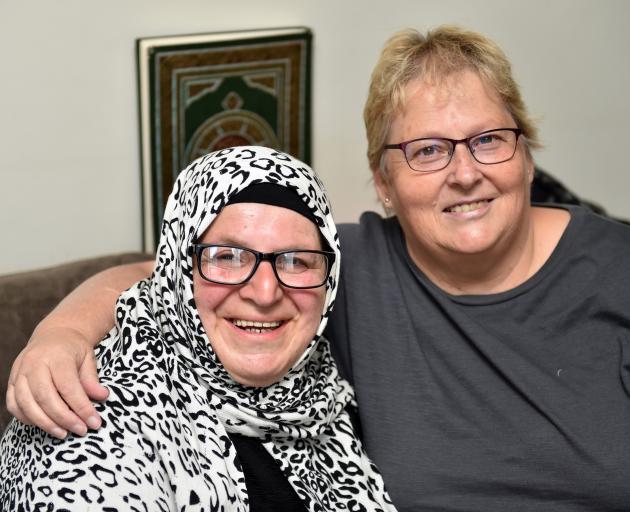 Marking International Volunteer Day yesterday with quality time together are good friends former refugee Wafaa Al Ashra (left), of Syria, and Red Cross volunteer Lynette Will. PHOTO: GREGOR RICHARDSON
A Dunedin nurse was last week made a life member of the Red Cross for her volunteering work over the past 24 years.

Yesterday, Lynette Will spent International Volunteer Day catching up with Wafaa Al Ashram, a former refugee from Syria who arrived in Dunedin with her son in April 2016.

The two have been firm friends since Ms Will was introduced to them upon their arrival.

"Wafaa is in a wheelchair — it’s her and her teenage son. They had quite high needs, which I tried to meet when I was placed with them."

Ms Will said she began volunteering with Youth for Christ 24 years ago and fell in love with it.

"Volunteering is so rewarding and there’s always something different.

The Dunedin woman went to Christchurch with Red Cross for both of the large earthquakes, in 2010 and 2011, and has been branch president of Otago Red Cross and a first aid instructor for the branch.

Working with refugees is what she has stuck to over the past five years.

"It’s been so rewarding — you get to see the difference in the refugees over time.

"They go from very overwhelmed to quite capable in the end.

"I was placed with a large refugee family last year — at one point I was there on average four times a week."

Ms Will said there was a large crossover between nursing and volunteering.

"They both require you to be practical and compassionate, so they both help each other."

Ms Will was recognised at a Red Cross thank-you event for volunteers.

"I think it’s a brilliant community to be a part of — that’s why I’ve stuck with it for so long."

The arrival of Syrian refugees to Dunedin today will mean a third refugee family for Ms Will to volunteer with.