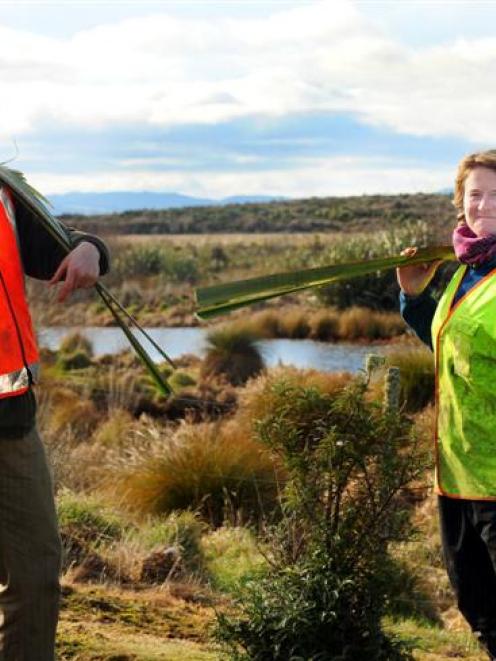 Briton Carley Shutt is spending her holidays doing volunteer conservation work at Sinclair Wetlands, organised by Conservation Volunteers NZ team leader Sam Rye. Photo by Craig Baxter.
Carley Shutt decided not to spend the British school holidays enjoying sun and surf in the Pacific, choosing instead a cold, damp New Zealand winter and the chance to do something for the environment.

She is one of seven volunteers from Germany, United States, the Netherlands, South Korea and Belgium spending time at Sinclair Wetlands, south of Dunedin, helping remove weeds and planting flax.

The 315ha wetlands are regarded as the largest and most important privately-owned wetlands in New Zealand.

For the next three weeks Ms Shutt, a secondary school physical education teacher from Lincoln, in the United Kingdom, will help clear tracks and weeds and plant flax.

It allowed her to see parts of the country off the normal tourist route and to do something different, she said.

The work had been identified as a high priority by wetland owners Te Runanga o Ngai Tahu and the society looking after the nearby Waihola-Waipori wetlands.

Ngai Tahu planned to set up a charitable trust to co-ordinate the implementation of the wetlands' management plan, which focused on ecological and cultural restoration and building the educational value of the wetlands.

"There has been ongoing concern regarding the weed levels and their effect on the cultural and ecological values of the wetlands. We need to focus on beating the weeds and restoring the wetlands for future generations."

Engaging the Conservation Volunteers was an indication of the kind of work the trust would be focusing on, as it used its resources more wisely for the benefit of the wider community, he said.