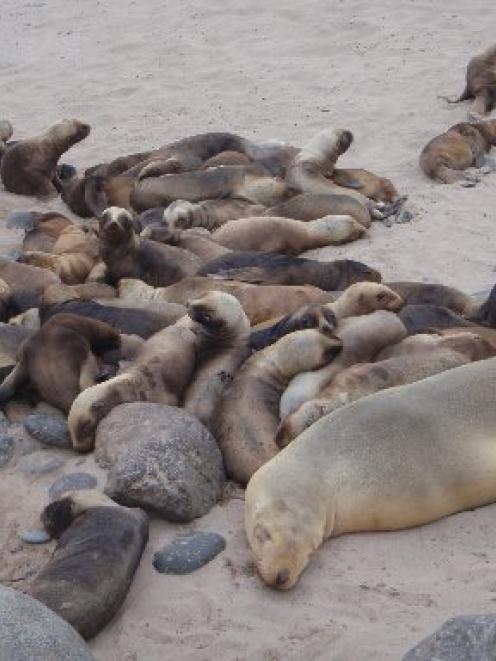 Sea lion pups on the Auckland Islands. Photo by Louise Chilvers.
Urgent interim measures need to be taken to protect the endangered New Zealand sea lion population given the serious rate of decline in pup numbers in the Auckland Islands, scientists and conservationists say.

Conservation Minister Nick Smith announced yesterday Auckland Island pup numbers had dropped 18%, to their third-lowest figure in about 20 years, triggering the need for a threat management plan to be developed ''promptly''.

''[It] shows an ongoing trend of decline over the last decade. We need to step up our efforts to ensure these sea lions survive,'' Dr Smith said from HMNZS Wellington at Port Ross in the Auckland Islands yesterday.

University of Otago scientist Bruce Robertson said while the move was welcome, he called on the Government to immediately revoke the operational plan for the Auckland Island squid fishery, and revert to the ''comparatively more precautionary previous operational plan'' until the new plan was finalised and in place.

''This would give fishery certainty of tonnage and all access to the valuable squid fishery, while giving due acknowledge to the existing threats and uncertainties in sea lion management,'' Dr Robertson said.

If fishing continued under the present operation plan, it would be ''at least another year for pup numbers to decline further''.

WWF-NZ called for ''urgent interim measures'' to protect the sea lions while the plan was developed.

Marine species advocate Milena Palka said WWF would like to see an extension of protection from trawling around the Auckland Islands to protect the foraging ground of breeding sea lions.

''Any threat management plan needs to be developed quickly, be based on the best science available and include tangible goals and measures that will ensure the recovery of the sea lion population,'' she said.

''A wider investigation was initiated in 2012 that indicated that environmental change and prey abundance were likely to have played a role in the population decline. There is also evidence that a bacterial disease has reduced pup survival rates over the last two decades,'' he said.

The number of sea lions caught in trawl nets had declined significantly due to sea lion exclusion devices. Primary Industries Minister Nathan Guy said despite high levels of observer coverage on the fishing boats, only a small number of incidental captures had been observed in recent years.

''[The devices] are a great innovation but we need to continue to monitor the use and effectiveness of these devices,'' Mr Guy said.

Dr Smith said the management plan, set up to trigger when pup numbers reached 1500, would review ''all the risks and explore all possible measures'' to ensure their survival.

Options included active field management, such as intervening to reduce the several hundred deaths from misadventure and disease, extending or creating new marine mammal sanctuaries, or additional measures to reduce impacts of fishing.

New Zealand Sea Lion Trust chairman Steve Broni, of Dunedin, said a review of all the risks facing the sea lions was published in 2011.

For any new review to have any real credibility, it needed to have a strong focus on the earlier review's conclusions, which included the fact decreasing numbers of breeding females was the result of fisheries-induced resource competition and fisheries-related by-catch, he said.

''Competition with fisheries, resulting in resource competition, nutrient stress and decreased reproductive ability in NZ sea lions, should be a priority area for future research,'' the paper said.

While disease was present in the population sporadically and did warrant further research, there was no klebsiella disease event in 2008, the year of the lowest pup count on record, Mr Broni said.

Dr Robertson said while there were mixed messages coming from Dr Smith and Mr Guy, the effectiveness of sea lion exclusion devices needed to be looked at, given there were questions raised internationally about how many sea lions survived being caught in nets with these devices.

''Waiting another year or two to change the current operational plan is, in the words of the expert panel, 'inherently risky','' he said.

Deepwater Group chief executive George Clement said the group supported Dr Smith's announcement and would work with the Government to address the issue of klebsiella bacteria.

The squid fishery was operating well within the old plan's permitted tow rate.

How quickly those plans were activated was critical and the industry continued to refine its technology to minimise accidental captures, he said.