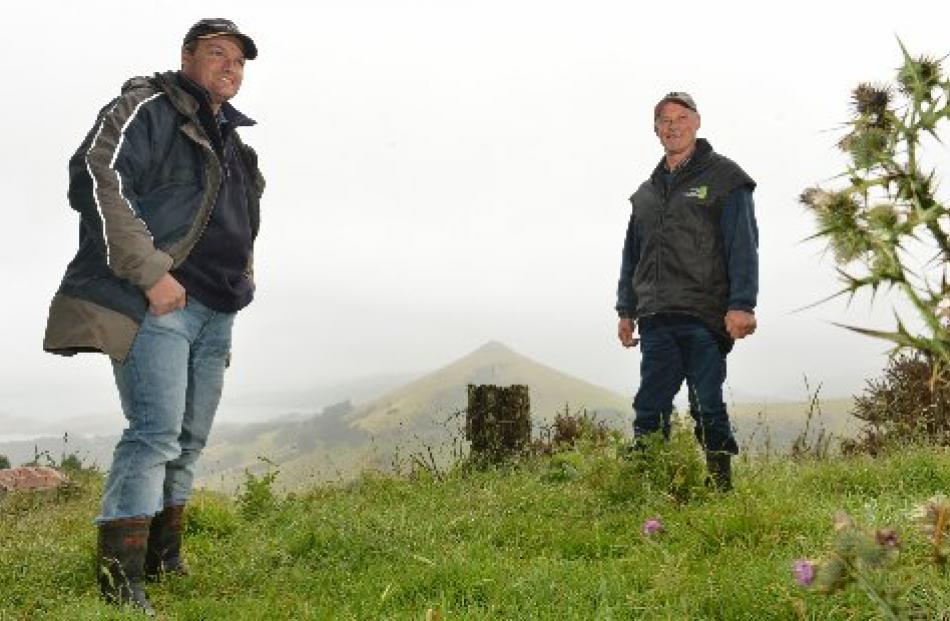 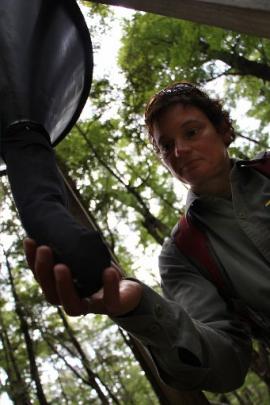 Sandra Barnaba, a Department of Conservation predator control worker, prepares a beech seed funnel in the Humboldt Mountains at the head of Lake Wakatipu. Photo by Bruce Munro. 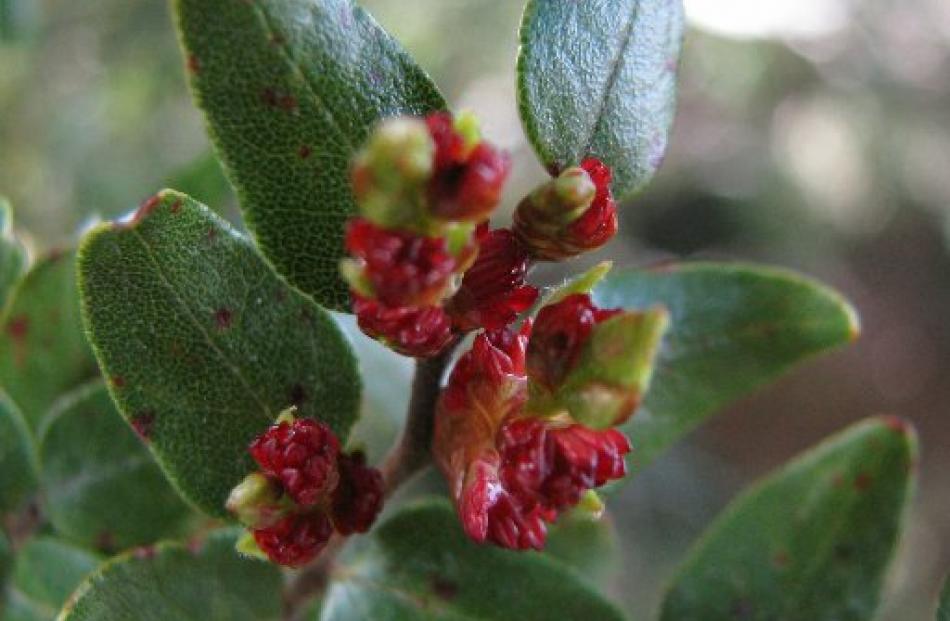 This year's beech mast is expected to produce one million tonnes of seed. Photo supplied. 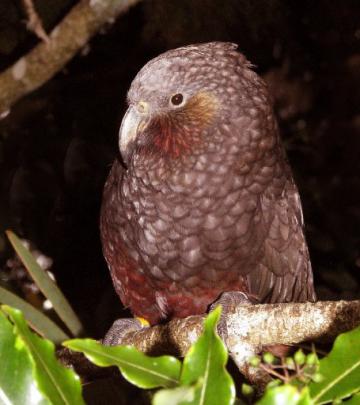 Enormous flocks of kaka have been reduced to a total population of fewer than 5000 birds. Photo supplied. 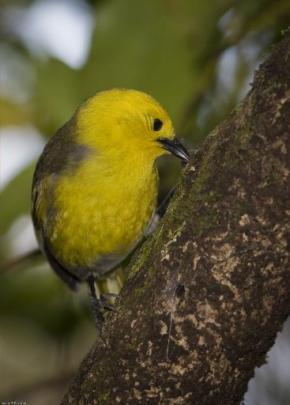 Without intervention, the mohua, or yellowhead, could be driven towards extinction by an expected explosion in predator populations. Photo by James Reardon.

To the southeast, out of view, the northern branch of the Route Burn is clearly heard gurgling towards the Dart River.

Three hundred and sixty degrees of natural wild beauty. But something is amiss.

No feather flits on vision's periphery. Not a single bird call is heard.

The forest stands too still. Sandra Barnaba is all too aware of the silence. It is the Swiss-born woman's second season eradicating predators in Mt Aspiring National Park.

Employed by the Department of Conservation (Doc), through a partnership with Air New Zealand, Miss Barnaba traps the stoats that prey on our native birds.

"It is a long war,'' she says while resetting a trap with a chicken-egg lure.

There are hundreds of traps to check, necessitating long hours in remote bush and weekly overnights in huts or bivvies.

The company of birds, when it occurs, is welcome.

"I see mohua [yellowheads] and kakariki [parakeets] each day. But each sighting is quite special,'' she says.''

"The mohua has a lovely song, and a strong tune for so small a bird."

Her work is valuable, and is having a positive effect. But a threat is coming that could sweep it all away.

Spring's heavy flowering of beech trees throughout the South Island is likely to result in skyrocketing rat and stoat populations in coming months.

It will put already at-risk birds and other native fauna in the firing line.

Doc and the Government have issued a call to arms in readiness for what they say could be the most deadly assault on our vulnerable and endangered wildlife in 15 years.

Miss Barnaba removes a black stocking tied over the base of the funnel's open throat. Inside are leaves and twigs and, after a careful search, two beech seeds.

This is one of eight funnels, each spaced 150m apart in this small section of forest, waiting for the seed fall to begin in earnest any day now.

There are dozens more funnels throughout the island's beech forests, ready to measure what could be a one million tonne seed fall triggered by the unusual warmth of the previous summer.

Also in position are tracking tunnels, which are expected to reveal an explosion in the number of rodents and mustelids, primarily rats and stoats.

A female rat can produce 10 offspring every eight weeks. In areas of the South Island about which Doc staff are most concerned, the beech mast (mass seeding) could potentially fuel the birth of four million rats.

When the seed supply dwindles, the rats will turn their attention to birds' eggs. In the meantime, the stoats will feast on the abundant rats.

When, as a consequence of their high protein diet, stoat numbers swell by tens of thousands, they will begin to prey heavily on birds.

It is of great concern in a country populated by native plants and animals found nowhere else on the planet and where about 2700 species are listed as endangered.

A conservative estimate is that 25 million native birds are killed by predators such as stoats, rats and possums each year. It could be much worse this year.

Such an extensive and widespread beech flowering has not occurred since the new millennium.

If nothing is done, the mohua, for example, could be driven to the edge of the slippery slope of extinction in the next 12 months.

In the 1840s, mohua were found throughout the forests of the South Island, Doc scientist Dr Graeme Elliott said.

The small bird's penchant for nesting in holes in trees made sense in ancient New Zealand.

But with only one entrance and exit, holes offer no protection from the four-footed predators that exited waka and ships and, noses twitching, climbed the nearest tree in search of a meal.

By the 1960s, mohua were in retreat. In 1999 and 2000, when the last significant rat and stoat plague occurred, the mohua population was savaged.

The estimated total mohua population is now below 5000, clumped in small pockets around the Catlins, eastern Fiordland, the Dart River, Landsborough Valley, Marlborough and some small predator-free offshore islands.

Mohua are only one of several species that could be put at risk by a significant beech mast. Kakariki karaka (orange-fronted parakeet), three types of kiwi (Haast tokoeka, great spotted and brown), kaka, kea, whio (blue duck), tuke (rock wren), short and long-tailed bats and the giant carnivorous forest snail Powelliphanta are all listed as vulnerable, or worse.

And all are on the stoat and rat hit list.

Titled Battle for our Birds, the five-year, $21 million programme will increase predator control in 35 forests, primarily through aerial drops of 1080 poison.

Nine Otago and Southland areas, including forests in the Fiordland and Mt Aspiring national parks, Catlins, Waikaia and Haast conservation areas will be targeted.

About $11 million will be spent in the first year. How much of that will be allocated to the South depends on the extent of the beech mast in the region.

But early indications are that ''seed is present and heavy in most places'', Doc science adviser Josh Kemp, of Nelson, says.

The planned 1080 drops will be enough to ''hold the line'' for the native species.

A growing number of people, however, are wanting something more ambitious than simply holding the line.

The catch-cry of ''predator-free New Zealand'' is growing in volume.

Early European settlers in Otago reported flocks of kaka - a grey-green and brown cloud shot through with flashes of orange and scarlet - which took 10 minutes to pass overhead.

Today, there are fewer than 5000 kaka nationwide.

In their former habitats are about 30 million possums and an unknown number of rats, mice, stoats, weasels and ferrets.

Dreams of a predator-free or pest-free country have been floated more than once.

They have even been pursued, in a limited way. New Zealand's success in creating predator-free offshore havens for endangered wildlife - such as Te Hoiere (Maud Island) in the Marlborough Sounds, Kaimohu and Pohotairea islands near Stewart Island, and Tuhua (Mayor Island) in the Bay of Plenty - has attracted international attention.

But the vision of all New Zealand's 26.9 million hectares becoming predator-free gained new prominence when voiced by the late Sir Paul Callaghan in his final public address in 2012.

Dr Bruce Warburton, who is Landcare's research priority leader, believes the predator-free goal is a 40- to 50-year aspiration.

Its value right now is to prompt the public and scientists to ''think about what would be needed to achieve it'', Dr Warburton says.

The cost of going predator-free has been estimated at $27 billion. But finance is not the only challenges.

Some step changes in technology are required. One such grand leap may come from the research of University of Otago scientist Professor Neil Gemmell.

Working with a group of scientists from the university, Landcare Research and Melbourne's Monash University, Prof Gemmell is looking to exploit naturally occurring mutations in DNA that could make predators unable to breed.

However, widespread support would be needed for the goals and methods of a predator-free campaign.

The use of 1080 is a case in point. Using the poison in pellet bait form is roundly condemned by some.

This despite the development of more targeted techniques, reduced dispersal rates, and evidence native bird populations almost always benefit from its use.''

You have to have the public with you or it will fail,'' Dr Warburton says.

The best way to go about wholesale predator eradication is still being debated.

The three leading models are a sweep through the country from north to south; progressively extending the fenced borders of wildlife sanctuaries such as Wellington's Zealandia or Dunedin's Orokonui until they meet up; or, doing something similar using defendable ''islands'' such as Otago Peninsula with ever-widening buffer zones.

The Otago Peninsula Biodiversity Group is already showing the way.

During the past three years the organisation has removed 6500 possums from the peninsula, group chairman Brendon Cross says.

Possums were targeted because there was wide support for their eradication among peninsula residents. Trapping was used rather than 1080 because it was less controversial.

The project and the approach has proven popular. Involvement has grown from 10 group members to about 60 volunteers.''

The community has been able to see good gains, which has helped get buy-in,'' Mr Cross, a sheepfarmer near Portobello, says.

The group hopes support from residents of Waverley, Shiel Hill and Andersons Bay suburbs will allow the residential belt at the foot of the peninsula to become a buffer zone, preventing re-invasion while mop-up continues behind the front line.

A fully formed plan for the next phase of the battle is yet to be drawn up. But Mr Cross believes it will probably have to be a multi-species project.

"We're not at that level yet. We need to remember where we've come from in a short time and lock in those gains.''

While quantifiable data is still being collected, anecdotal evidence suggests native wildlife is already returning to the Peninsula.

Bob Morris is a biodiversity group trustee and a farmer at Sandymount, on the peninsula's rugged southwest coast.

The 65-year-old has lived and worked this land his whole life.

"In the past six months we've had tuis in the garden my wife has developed,'' Mr Morris says.

"It's the first time I can ever remember seeing tuis here.''