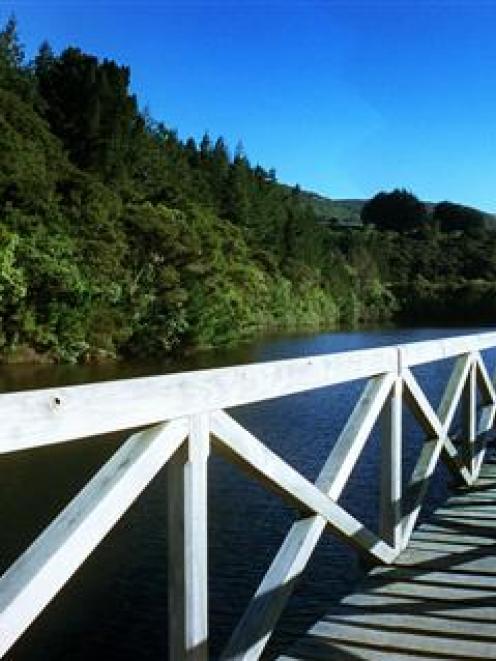 Ross Creek reservoir, in Dunedin. Photo by Gerard O'Brien.
Climate change, peak oil and a $1 billion bill are just some of the challenges identified in the Dunedin City Council's 3 Waters strategy document.

However, the 3 Waters Strategic Direction Statement 2010-2060, to be considered at Monday's infrastructure services committee, also outlined the high-level thinking behind plans to tackle each, as well as identifying opportunities.

While the costs contained in the strategy have caused alarm in some quarters, council water and waste services manager John Mackie said the document was "not about money".

Instead, it was outlining the broad strategic direction the council should take, and how that direction could be implemented over a longer period.

The council was required by the Local Government Act to plan 10 years ahead through its long-term council community plans (LTCCP), but the new document looked ahead 50 years.

"The long-term view paints a different picture, than if we are just looking at 10 years," Mr Mackie said.

The challenges ahead "certainly are big", but also manageable, he said.

"We have got 150 years' history of building infrastructure in the city," he said.

The water infrastructure network, with a replacement value of $1.4 billion, was more than 100 years old in places, and supplied services to 124,000 people through thousands of kilometres of water mains, sewers and stormwater pipes, the document said.

The strategy outlined in broad terms how the council should plan to respond to challenges, beginning with water conservation.

The city should aim to meet its water needs for the next 50 years from existing sources, by reducing leakage from 15% to "sustainable economic levels" by 2020, as well as promoting public conservation.

Another aim was to increase the flexibility and resilience of the network, building new connections to minimise the impact if critical individual pieces of the network which did not have replacements or back-ups were lost.

The council's dependence on non-renewable energy sources as well as, for example, oil-based products used in pipes would also be reduced, the strategy said.

In part, that would be done by investigating the development of renewable energy generation within the Dunedin water network, possibly including the installation of micro hydro-generators within high-pressure parts of the council's network of water pipes.

There should also be greater use of sludge at the Tahuna wastewater plant to generate methane gas for fuel.

The environmental impact of the council's water discharges would also be a focus, including tackling cross-connections between stormwater and wastewater pipes by 2015 and reducing the number of sewer overflows during wet weather.

The document also outlined plans to reduce contaminants in stormwater, either by tackling the problem at its source or through stormwater treatment, the report said.

The affordability of the forecast $1 billion bill to maintain existing service levels to 2060 would be addressed by a rise in renewals spending, to $25 million each year.

Staff would also work to identify ways of extending the life of pipes and other assets, and carry out "comprehensive consultation" with the public on areas of water services where spending could be reduced.

That would not include changes to drinking water quality, or the deferral of planned work to improve wastewater and stormwater quality and tackle flooding issues, which were "particular priorities" for the public, the report said.

Water rates and charges would be limited to an affordable level "where possible", while financing services, with investment challenges met by "efficiency in our core service", it said.

There would also be a greater emphasis on catchment and network management.

Council 3 Waters asset planning manager Laura McElhone, in a report to next week's committee meeting, said the aim of the strategy was to ensure decisions made today did not negatively impact on future generations.

Consultation had already involved workshops with 31 key stakeholders and interest groups, internally within council departments, and a telephone survey of 600 Dunedin households, she said.

There would be no further consultation on the strategic document itself, but detailed financial assessments would be developed and consulted on through future LTCCP and annual plan hearings, she said.