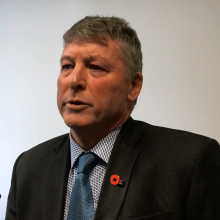 Andrew Noone
More work will be needed — both in rural and urban areas — to stop rivers degrading in the South.

Otago Regional Council chairman Andrew Noone said robust regulation of land use was required, alongside efforts on the ground to drive improvements.

The quality of water in much of Otago has been assessed as among the highest in New Zealand, but urbanisation and intensive farming are putting pressure on water quality and aquatic ecosystems.

"Good water quality is everyone’s responsibility, and it’s going to take a collective effort — not just from our farmers, but also in our towns and cities — to see improvements across Otago," Mr Noone said.

In Southland, there has been little change in water quality in the past 10 years, reflecting the national picture.

A lot of work was being done to create change, he said.

The comments from Mr Noone and Mr Phillips followed Land Air Water Aotearoa (Lawa) releasing a national summary yesterday of water quality for 2010-19.

Mr Noone said the national picture showed poor water quality was not just a rural issue.

‘‘It’s clear from these results that our urban catchments are also in need of attention,’’ he said.

More than two-thirds of Otago sites were graded as ‘‘good’’ or ‘‘excellent’’ in the regional council’s recent state of the environment monitoring and some waterways had improved.

"A lot of those improvements owe to the great work being done in our communities and catchment groups," Mr Noone said.

Lawa reported that rivers draining higher altitude and less developed areas, and the outlets of the large lakes in Central Otago, had consistently excellent water quality in the past 10 years.

However, Dunedin’s urban waterways had some stormwater contamination and intensive farming was having a detrimental effect on rivers in south and west Otago.

Water quality was nonetheless improving in areas that did have problems caused by larger urban and industrial waste discharges.

In Southland, and nationally, water quality was best in rivers and streams running through catchments with native vegetation, and poorer where water came through pasture and urban land.

Lawa reported water quality was generally excellent in natural-state areas such as Fiordland and Stewart Island.

However, many lowland rivers and streams showed elevated levels of nutrients. The Mataura and Oreti rivers were two of the most nitrogen-enriched in the country.

Pressures on water quality in Southland were mainly due to agricultural intensification and industrial and urban discharges and extractions.

Mr Phillips said it was clear everyone needed to do more work to improve water quality.

"We’re working with farmers, the rural sector, business community groups and other councils to ensure the best decisions are made.’’

You can spin it all you want but the fact is the Regional Councils have failed to protect our environment and should be held accountable. By your own admission nearly one third of our waterways are polluted and while it is everyones responsibility not to pollute it is your responsibility to protect. The time for balancing, working with, educating and compromising with farmers and community economic needs is over. Just do the dam job you are payed to do and protect the environment!!!