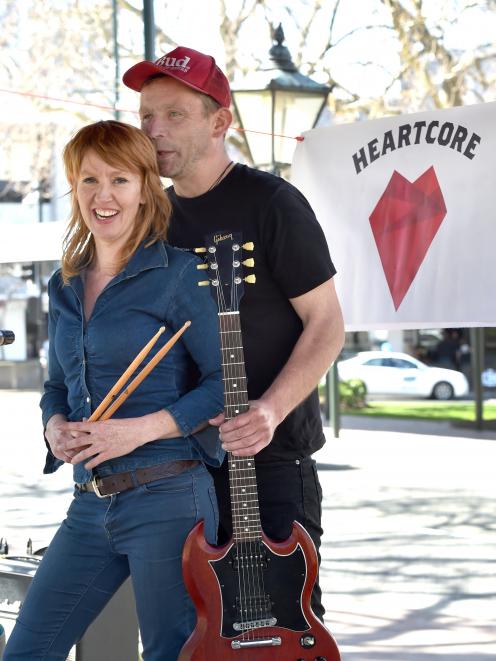 Pottley Blues Collective singer ‘‘Pottley’’ (right) hugs his drummer, ‘‘Red’’, moments after she accepted his marriage proposal during a live performance in Dunedin’s Octagon. PHOTO: PETER MCINTOSH
As far as wedding proposals go, it was pretty rock and roll.

The lead singer of Dunedin band the Pottley Blues Collective interrupted a live performance in the Octagon at lunchtime yesterday to pop the question to his drummer.

Watched by a crowd of about 40 people, the singer - who would give his name only as "Pottley" - put down his guitar and produced a handfasting ribbon, before asking his drummer to marry him.

The drummer, who would only give her name as "Red", barely batted an eyelid as she accepted.

"Sounds all right to me," she replied, still sitting behind the drum kit.

Concert organiser Mandy Mayhem-Bullock then rushed on stage to hurl confetti at the happy couple, followed by friends who hugged the pair, before they completed their set with two more songs.

Asked why he decided to propose on stage, Pottley replied: "Why not? It's about time we did something - why not here?

"It's the perfect place," he said.

Red said she had "a little bit of an inkling" something was up, "but not really".

The couple were yet to set a date for their wedding.