A wing and a prayer 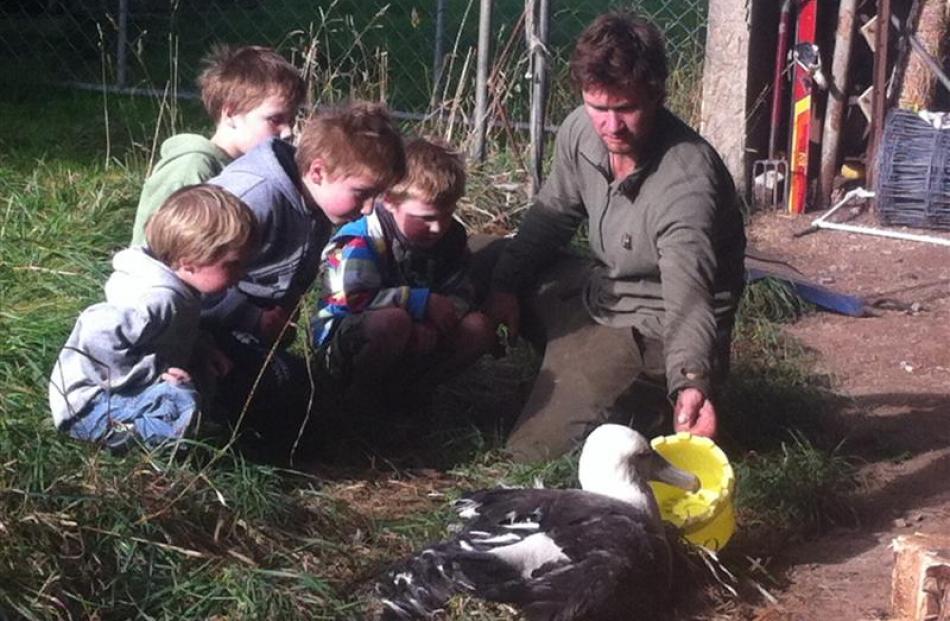 Mark Caldwell, of Dunedin, feeds an injured bird, thought to be a royal albatross, watched by his children (from left) Ollie (3), Josh (8), Micah (6) and Sam (5), after they found it on a Catlins beach while holidaying this week. Photo by Julz Cadlwell.

A broken wing could spell the end for a bird, believed to be a royal albatross, found by a Dunedin family on a Catlins beach this week.

Julz and Mark Caldwell have been nursing the injured bird since finding it in a weakened state on the beach at Haldane Bay on Monday morning.

Mr Caldwell said the bird's left wing was hanging ''by a feather'' and he wondered whether it had been bitten by a shark.

''From the sound of it, the wing was probably injured on impact with something. It's more likely the bird crash-landed in the high winds,'' he said.

Mr Agnew was liaising with the Caldwells about what to do with the bird.

He said in cases of major wing injuries, it was sometimes best to euthanase large sea birds.

''They need good strong wings and once they've got a badly broken wing, it [euthanasia] can be the kindest thing.

"Depending on the injury and the circumstances, Doc can also facilitate specialist treatment, which can include work by Massey University or local vets.''

The Caldwells, on holiday at a family farm in the Catlins, have been feeding the bird fish and shellfish.

A friend who happened to be a theatre nurse was helping care for the bird, Mr Caldwell said.

''We were going along to get some mussels and saw it lying on the beach, quite far up on the sand. We weren't sure what had happened to it, so called Doc and took it home,'' he said.

''The kids have been giving it cockabullies they've caught and it's been eating shellfish as well.''

Mr Caldwell said the injury looked as though it was a few days old when they found it.

''It wasn't bleeding and had started to heal up a bit. The albatross seems OK, just weak.''

Mrs Caldwell said their children had nicknamed the bird ''Albie'' and they hoped it could recover.