By John Lewis
0 Comments
When Anna Feillet started strumming the first chords of a song during a "really boring" road trip, the last thing she expected was for it to become a hit sung by school pupils across the country.

"We were going up to the top of the South Island and I got really bored.

"So I took my ukulele out and I just kind of did some quiet strumming and found some chords that work.

"I got inspiration for the lyrics from what I could see out the window."

A couple of weeks later, the Otago Girls’ High School 14-year-old completed her song Aroha I Aotearoa, and entered it in the New Zealand Music Month Hook, Line and Sing Along Competition.

Much to her surprise, Anna won the competition. As part of the prize, she had her song recorded at Auckland’s Roundhead Studios.

It was then learnt by pupils and sung in schools all over New Zealand at noon yesterday, in the nationwide Hook, Line and Sing Along event, as part of the last school day of New Zealand Music Month.

Pupils at St Clair School, in Dunedin, had the honour of having Anna sing the song with them during the event.

The pupils used online resources provided by the New Zealand Music Commission, to not only learn to sing the song, but sign the song using New Zealand Sign Language, and accompany it on ukuleles. 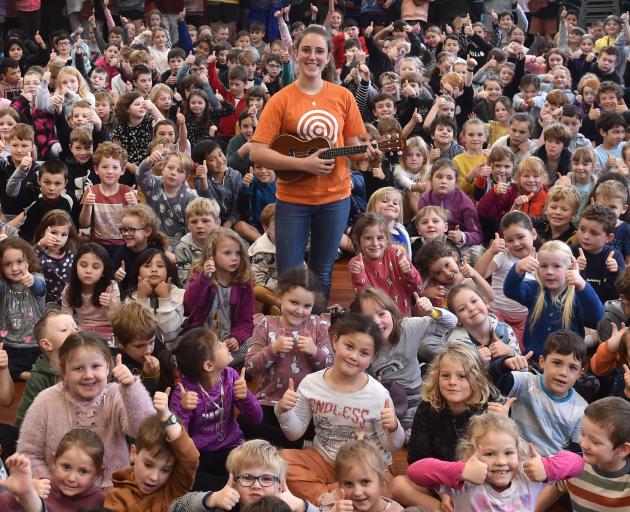 Otago Girls’ High School pupil Anna Feillet’s national award-winning song Aroha I Aotearoa got the thumbs up from pupils at St Clair School in Dunedin yesterday. Photo: Peter McIntosh
They were extremely excited to meet the songwriter and perform the song with her, teacher Alison Caldwell said.

Anna said the second big surprise for her was how much the pupils loved the song.

They continued to sing it as they filed out of the school hall after the assembly.

"It was honestly amazing. I thought some of them would know the song, but they were all really good.