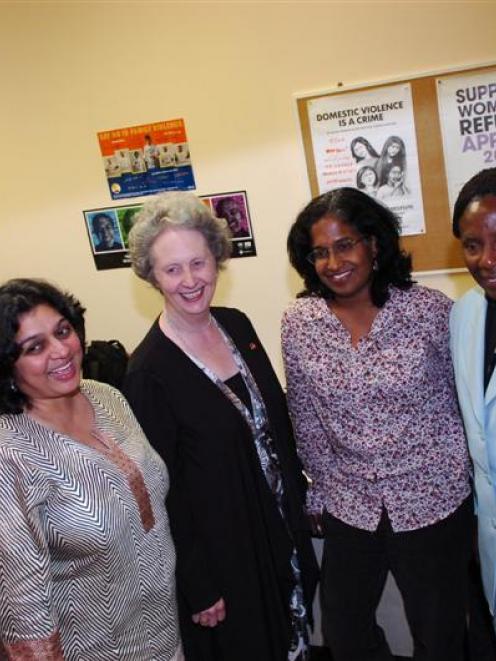 Shakti Community Council Dunedin ethnic women's drop-in centre officially opened yesterday thanks to the work of many, including (from left) national chairwoman Rupal Mehta, Dunedin steering group founding member Jean Park, counsellor and senior adviser Shila Nair, and Dunedin co-ordinator Namakau Nalumango, at Dunedin Community House yesterday. Photo by Jane Dawber.
It may not be a popular organisation, and Dunedin Mayor Dave Cull may have mixed feelings about it opening in the city, but Shakti Community Council's services are considered vital and its Dunedin drop-in centre was formally opened yesterday.

The organisation, which started in Auckland in 1995, runs four women's refuges, drop-in centres and a 24-hour crisis line for ethnic women in New Zealand.

The Dunedin centre was its 10th in the country and was instigated after reports from social agencies about the increasing demand for an ethnic-focused service in the city.

Shakti's South Island base was also destroyed in the Christchurch earthquakes, speeding up its establishment here.

In African, Asian and Middle Eastern cultures, violence towards women was culturally accepted.

"We are not a popular organisation because we air the dirty laundry in public, [but] this is vital," she said.

Mr Cull said he was "actually quite sad to think there is a need for Shakti here", but he was "glad" it was established because there was an obvious need for its services.

The Dunedin drop-in centre, operating from Dunedin Community House, would provide support for women who visited, and those in the community.

A 24-hour crisis line was available, and it would actively work with other organisations working in the domestic violence field.

Over time, in-house legal advice and counselling would be provided.