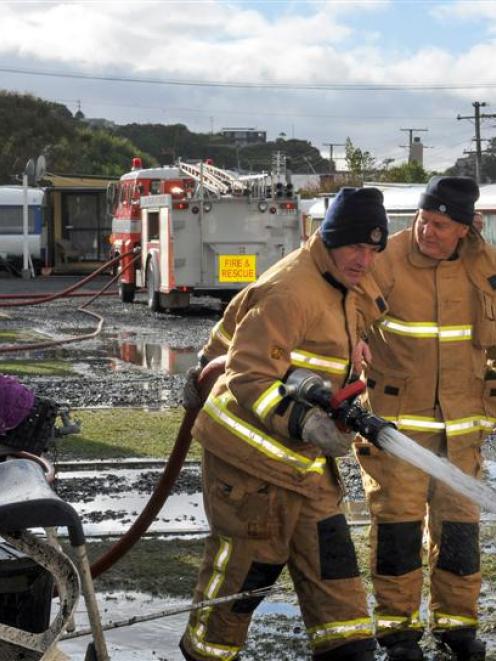 Brighton Volunteer Fire Brigade senior firefighter Barry Day (left) and Chief Fire Officer Ian Armstrong clear mud and silt from caravans at Brighton Caravan Park yesterday. Photo by Gregor Richardson.
The clean-up of the most badly affected homes following the flooding in South Dunedin is expected to be completed in the next few days, the Dunedin City Council says.

Council services and development general manager Simon Pickford said of the 6000 homes assessed after the flood, 280 were deemed to be of the greatest need. Council had now attended to most of those.

''We are through most of the acute ones. By the end of this week I would hope we've cleared all of that [work] away.''

Mr Pickford said about 70 volunteers had helped to clear rubbish and remove furniture from affected houses on Saturday. This was prompted by requests received from the South Dunedin community.

''We were quite overwhelmed with that response. I wasn't sure how many volunteers we were going to get,'' Mr Pickford said.

''The recovery centre was buzzing in the morning, which was really great to see.''

Mr Pickford said the centre, which was set up at the Church of Christ hall in Prince Albert Rd following the flood, would remain open ''as long as the community needs it there''.

''Each day we're making an assessment. It's becoming less and less about the acute need and more about long term recovery.

''But it's great for the community to have that space to go and sit down and have a cup of tea and a biscuit and just talk through their issues with someone.''

Mr Pickford said the council had received nearly 1000 reports of flood damage and was ''working through that as we go''.

He said while most people had been rehoused after damage to their properties, the council's priority was getting people back into their own homes.

''Most people who have been removed have found accommodation with friends and family, which is ideal. We have also managed to find a lot of council properties and social housing which we've managed to put people up in.

''But really what we want is people to go back to their homes, and that's what we're trying to facilitate.

Work was carried out yesterday to clear silt and rubbish from the Brighton Caravan Park, which was badly affected during the downpour.

Brighton Volunteer Fire Brigade Chief Fire Officer Ian Armstrong said workers cleared the mess from under many caravans in the park. The rubbish had created quite a smell, he said.

A contractor would be employed to scrape out driveways and replace them with fresh gravel in the coming days.