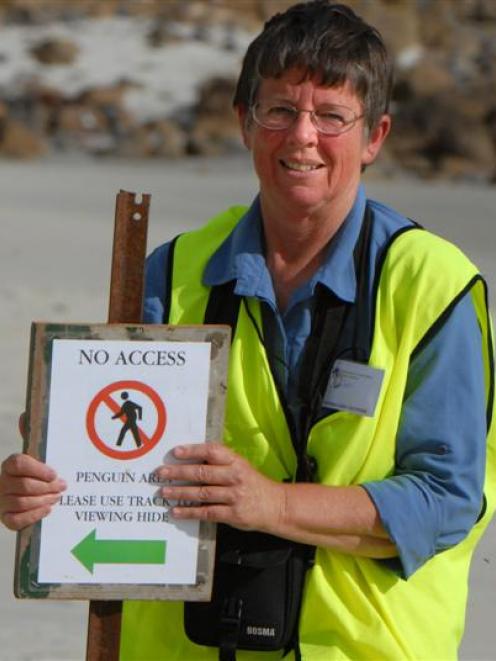 Doc volunteer warden Pat Dean believes there is still room to improve signs. Photo by Gregor Richardson.
Two University of Otago zoology graduates are stationed at Sandfly Bay on the Otago Peninsula this summer, not to study the bay's yellow-eyed penguins but the bevaviour of the humans who come to visit them.

The study is designed to help find out why tourists go to the bay, what they do there and how they interact with its wildlife.

Last year, a study of the penguins found they were under stress from being disrupted by human visitors and, as a result, the Department of Conservation introduced better facilities for visitors, more signs and it also set up a group of volunteer wardens.

To gauge the effectiveness of these measures, science graduates Kate Beer and Aviva Stein are observing the movement of visitors and interviewing as many as they can as part of research being carried out by Dr Philip Seddon.

The results will be compared with a similar survey done in the summer of 2002-03.

One of the volunteer wardens who patrol the beach, Pat Dean, said that despite signs at the entrance to the beach, many visitors lacked an appreciation of how important it was to give the penguins space.

Visitors usually timed their visit to view adult penguins as they returned from the sea in the evening to feed their chicks.

However, the penguins would not proceed if people were nearby on the beach, and that left chicks to go hungry.

"Most nights when it's busy, you would see at least one bird come and go [without feeding its chick] because there's a person on the beach.

Mrs Dean is one of seven volunteers who try to cover every evening during the summer.

All tourists spoken to by the Otago Daily Times were concerned for the welfare of the penguins, but most did not know how best to avoid disrupting the birds.

Signs advise visitors to stay 200m away from any penguins, stay out of the sand dunes and walk to the viewing hide to watch the penguins come ashore.

Mrs Dean said the signs did not get the information across to many visitors and she believed they could be improved.

But, she said, although wardens had no enforcement powers, visitors almost invariably responded well when approached.

"People are good if you say they've got chicks in there."

Last year's study by PhD student Ursula Ellenberg showed even careful visitors to nest sites cause a doubling of the penguin's heart rate, with the birds needing up to half an hour to recover.

As a result, chicks can suffer and birds could abandoned their nests.

Mrs Dean said sometimes tourists with cameras disappeared into the dunes, where nests could be, but she did not pursue them so as not to "double the damage".

Now into her second summer, Mrs Dean said she had had only one problem visitor, a Dunedin man, who insisted on getting close to penguins in a "David Attenborough" style approach.

Mrs Dean said tourists often lacked the patience to wait late into the evening to see penguins emerge from the sea.

"Some of them want to see a bird now because they can only stay another five minutes. I need a radio controlled one, I reckon."