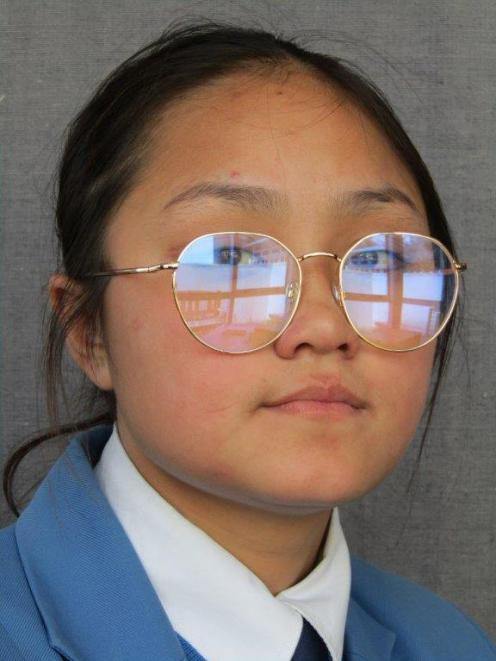 Hannah Than, Year 12, Queen’s High School
The sun was almost hesitant, the big ball of gas was covered by clouds every other moment and it introduced a cold wind each time.

It was late September, school had been cut short because the teachers around Dunedin collectively had to attend a meeting of some sort.

I had decided to wear a plain, ribbed, black short sleeve shirt, and a cute, blue, denim skirt. I paired this with my usual white Nikes.

This was the best outfit I could come up with in response to the saying: "Make a good first impression".

I was nervous, obviously. This was my first time meeting him.

We agreed to meet up at the beach.

As I began my journey, it was as if the world around me had suddenly changed and I was rather excited.

My walk turned into a confident strut, and my self esteem skyrocketed with each step.

It was as if I could now see the world in bright colours.

I remember on cue, the sun shone down on me brightly.

This showed me that right here and now was where I was supposed to be — that I was playing my cards right, in this game of life.

When I arrived, I flicked him a text message, notifying him that he would be blessed with my presence.

I knew the first encounter would be awkward, but to my surprise he had a strategy to combat this.

So I played along.

Entering the lonely beach, I felt the soft sand beneath my shoes.

Everything was still in bright colours like I was seeing through a filter that showed me only the good.

The breathtaking view of the ocean, sporting a prominent blue that announced it was now my favourite colour, the grass on top of the sand dunes, showing off their green and yellow tinges of nature.

I took a moment to admire the ocean, how big and wonderful it had seemed. How mysterious it was.

Little did I know, this new view I had of the world was induced by the awaited beginning of a very special friendship.

As a pessimist, and taking in how infinitely endless the beach had seemed from one side to the other, I had already concluded that I would never be able to find him.

He soon realised this, as I wandered aimlessly looking lost, like a child who had wandered off on their mother at the supermarket.

Up in the grass, above the sand dunes, out popped a figure in blue who had obviously been hiding there.

When he was closer, it really began to dawn on me that I had got this far and there was no turning back.

I froze up, and my nerves started to eat me alive.

His complexion was just my type.

When we were now eye to shoulder, he began by initiating a very memorable, "handshake, high five, and bro hug", in that order, as discussed.

My nerves had eaten me alive and my soul was melting away slowly.

I was on a rollercoaster of emotions, minus the motion sickness.

This was only the start, but my systems had already shut down and were malfunctioning.

We went on an unplanned walk, which would force the awkward silence to break by all means.

The day progressed and we walked until the sun had started to set and our legs became jelly.

We had talked and talked about anything we could come up with, and at this point the streetlights came on, but neither of us wanted to go home yet.

Although it was awkward at times, I won’t lie, I was in awe of his pretty face, mostly as the photos he was in, they served no justice.

His bold brown eyes told me that he had a story, and I knew that this one would be worth listening to.

His perfect eyebrows, which he undeservingly had, complimented his face harmoniously.

It was soon to be the moon’s turn to come out and play.

The streetlights exhibited a fuzzy orange light that illuminated the lonely streets, and it was finally time to go home.

We continued conversation as he walked me home, and as the day was coming to an end, I felt a familiar feeling — a feeling that I hadn’t felt in a while. Happiness.

We separated ways with our new signature "handshake, high five and bro hug".

I knew that this was it for me, the one thing my heart yearned for, as I caught myself smiling on my way home.

In this game of life, things happen for a reason, whether it be good or bad, the path set out for you will most definitely not be a straight nor smooth one.

My path was clear to me now.

The impression I got from him was good, and I sure hoped I had given him no less.

Our first encounter will always stay with me.

I was lucky enough to meet him, and in response I was exposed to the beauty that exists in the world, getting to know the story behind those brown eyes.

It isn’t always sunshine and rainbows.

Sometimes, it’s a sad rainy day for those who aren’t as lucky.

Memories are made of this.