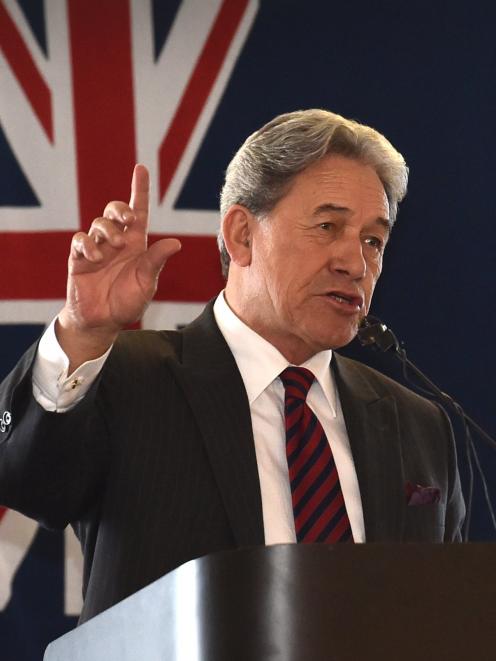 Winston Peters said he will wait to find out what 384,000 people who cast a special vote said. Photo: Peter McIntosh.

NZ First leader Winston Peters says he'll wait until special votes have been confirmed on October 7 before getting down to the business of forming the next government.

His decision leaves the country in limbo with National remaining installed as the caretaker government.

"This will be the last press conference I am going to hold until after the 7th of October... I can't tell you what we are going to do until we have seen all the facts," he told reporters at a press conference this afternoon.

Mr Peters said he might talk to National and Labour before October 7, but "I can't talk to you until I know what the 384,000 people who have cast their vote said... please don't write the kind of thing saying someone has moral authority...we are not first past the post here."

He said he had seen many articles and commentary about what NZ First would do, which was disappointing. He is now holding up a newspaper and complaining about the article.

Mr Peters said questions could be put to the Electoral Commission on why special votes weren't yet counted. "We don't know yet what the exact, precise voice of the New Zealand people is...that will change things in my view."

Mr Peters arrived in Wellington today as the country awaits a decision on which party New Zealand First will help form a Government.

The group of MPs that will discuss upcoming negotiations include former Labour candidates, a former newsreader, teachers, a small business owner and army officers.

Mr Peters earlier arrived in Wellington, but refused to talk to waiting media - saying he is here to meet his MPs.

New NZ First Shane Jones also arrived at Wellington Airport and told media there would be much discussion today about how the campaign went.

Regardless of who Peters decides to put into government, I'm still pretty angry that this MMP system allows a loser to decide who governs our country. This isn't democracy.