The Greens say they'll still push for wealth tax and other inequality gaps, despite it not forming part of its ministerial responsibilities under the new deal signed with Labour today.

About 85% of roughly 150 Green delegates voted in favour of the deal on a lengthy conference call last night. They were presented the deal following several rounds of talks between Labour and Green leaders that concluded on Thursday.

Ardern said it was "fantastic" to have the agreement formalised. Shaw called it a "win-win".

Davidson said she could still stand strong - even against the Government - on the Ihumatao issue because that was an issue outside of the Greens' ministerial portfolios.

Ardern said Labour would not put the Cannabis Legalisation and Control Bill into the ballot where it could be drawn as a member's bill.

Davidson said putting the bill forward as a Green MP member's bill had not been discussed with caucus.

She said the party's wealth tax was not part of the ministerial portfolios given to the Greens, so the party could continue to push for ways to address inequality.

The signing took place in the Prime Minister's boardroom on the ninth floor of the Beehive this morning.

Ardern outlined the agreement, saying it represented the continuation of the Labour-Greens relationship and provided stability.

The agreement means the Greens cannot oppose the Government on confidence and supply.

Ardern said she wanted to bring as much consensus as possible, though the agreement did not require consensus to be formed.

She said Shaw and Davidson provided specific expertise that would be used in their ministerial portfolios outside Cabinet.

The Green co-leaders will have the ability to note where Government policy within their portfolios differs from Green Party. There is also the standard agree-to-disagree provision available.

They may staunchly oppose the Government on other matters. 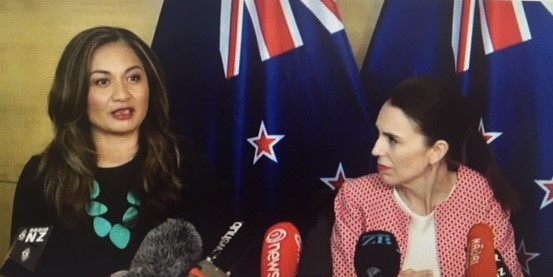 Yesterday Ardern unveiled the proposed deal in its entirety half an hour after the delegate call began – she told media it was important that the deal was made public for "transparency" reasons.

She also signalled that she will be looking to work with Opposition parties on a number of areas of cross-party co-operation, such as extending the parliamentary term and the abolishing of the "coat-tailing" rules.

Davidson said the Greens campaigned on climate change, biodiversity and inequality spaces, and the agreement allowed the Greens to "keep pushing" on those issues while also protecting the Greens' independent voice.

She said time was running out on those issues.

Shaw said it was a privilege and an honour to be returned to Parliament with an expanded caucus and with ministerial portfolios. "We are delighted to have a win-win agreement here."

Shaw said he didn't feel gagged by the agreement - "not in the slightest".

The delegates who didn't support the agreement had compared the arrangement to 2017, but Shaw said it was more reasonable to compare it with 2005 and the 2020 agreement was stronger than that one.

Davidson said the party understood that Labour had offered wins to the Greens despite Labour holding a parliamentary majority.

She said she was honoured to continue Green MP Jan Logie's work towards ending family and sexual violence. "I get to be able to work with her and continue on to the next step."

Ardern said a cross-parliamentary discussion would be needed about having a four-year term, including whether it should be put to a referendum.

Davidson said a unique aspect of the agreement was to allow the Greens to outline where they would want to go "further and faster" than the Government.

So much for people voting to keep the Greens out of Parliament - thanks to Labour they are back in and worse than ever.

Not actually. People voted to keep National out of Government.

Not actually, the media reported that farmers voted labor so that labor could govern alone and keep the greens out of parliament.

It was said at a farmer meeting (I was there) by the NZ farmers, that they used the party vote by voting Labour to keep the Greens out of the ruling Government, as I said at the farmers meeting, not very clever thinking boys, I guess now one can say, I was correct in what I said.