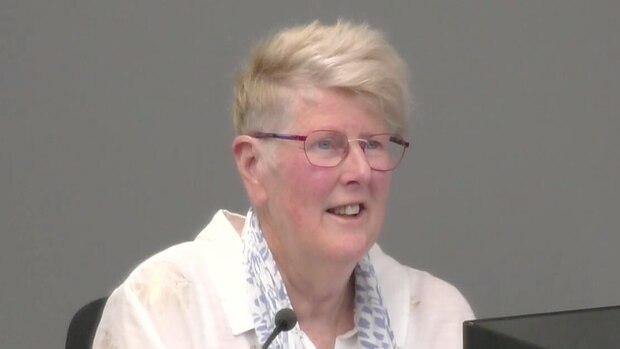 Joan Bellingham said the electroconvulsive therapy left her with weeping sores, and she still had scars from the burns on her scalp. Photo: Abuse in Care Royal Commission
A woman placed in hospital care for over 12 years and subjected to electroconvulsive therapy over 200 times for being a lesbian says the struggle for redress was "almost as bad as the original abuse".

Survivors this week are sharing their experiences in seeking recognition and redress as part of the ongoing Abuse in Care Royal Commission of Inquiry, investigating abuse in state and faith-based care between 1950 and 1999.

Joan Bellingham today spoke of how while a trainee nurse at Burwood Hospital in Christchurch in 1970, aged 18, she was picked on for her sexuality.

The 1970s was a "very different time", when sexuality was not something publicly talked about, although Bellingham had always been "very open about it".

"I have been gay for as long as I can remember. I never thought of it as something I needed to hide away."

But as word got around the hospital she was gay, she began to be bullied - even being falsely accused of stealing drugs from a hospital trolley.

After this "things escalated", she was told she needed treatment and taken to The Princess Margaret Hospital that day.

"I didn't have my clothes with me or anything. I had no choice in the matter."

She would spend 12 years as a patient there, and never got to finish her nurse training.

During her first months there she was admitted to a psychiatric ward, believed to have a "neurotic personality disorder".

Her parents were concerned, but didn't question the doctor's authority.

All throughout Bellingham tried to speak to the medical staff, telling them they made a mistake, but they gave her drugs to "quieten me down".

"The worst part is that I never felt like I was given a genuine choice, or that the doctor was listening to me."

She would be in and out of hospital over the next 15 years.

She was given a range of antipsychotic drugs, which blurred time, and she lost the will to live.

Doctors never explained what she was being given, nor why, nor any of the side-effects.

In some cases she was given over three times the normal amount, according to her medical notes.

Over this period she was also subjected to electroconvulsive therapy (ECT) over 200 times.

"There was no regular pattern. Sometimes it would happen twice a day."

She would be given a muscle relaxant to paralyse her.

"It felt like razor blades going through my body."

Every time afterwards, she became faint and dizzy, and vomited. At times she would go temporarily blind.

"I would vomit and cry and beg them not to do it again."

But she was never listened to.

One time she was put in a room with no facilities, and given a large amount of drugs.

She peed on the floor, and was punished for it.

"I felt so humiliated. I felt like I had no reason to live. I hated myself."

She still has scars to remind her of that time.

She also has scars on her head from ECT burns, which hairdressers today will comment on.

Perhaps the most damaging effect of it all though, was her loss of memory, Bellingham said.

"I cannot remember anything about key events in my life, particularly in my 20s."

She was also subject to questions about being a lesbian.

"He would ask me questions like, 'How many times a week do you have sex with your partner?', and, 'What is it like?'

"I would become very scared and not want to be left alone in a room with him."

She ended up hating herself, and even asking for ECT.

Despite all her time in hospital, after her last admission in 1982 there were never any follow-ups.

In 2000 she was diagnosed with Hepatitis C, which she believes came from the ECT rods.

She made complaints during her time in hospital, but these were never followed through, all the while her memory became worse and worse.

She made numerous attempts for recognition and redress over the years, including with lawyers, GPs and even local MPs.

The only redress she received from the Crown came in 2012, when she received a $4000 "wellness payment", $4250 towards her legal fees - which were much higher than that, and an apology.

But there came no admission of liability, and the settlement was required to be secret.

There were also issues with it potentially cancelling her ACC claim.

She recalled ACC initially telling her the burns could have been from cigarettes.

"The uncertainty with seeking redress was almost as bad as the abuse. My hope is that no one has to go through what I went through."