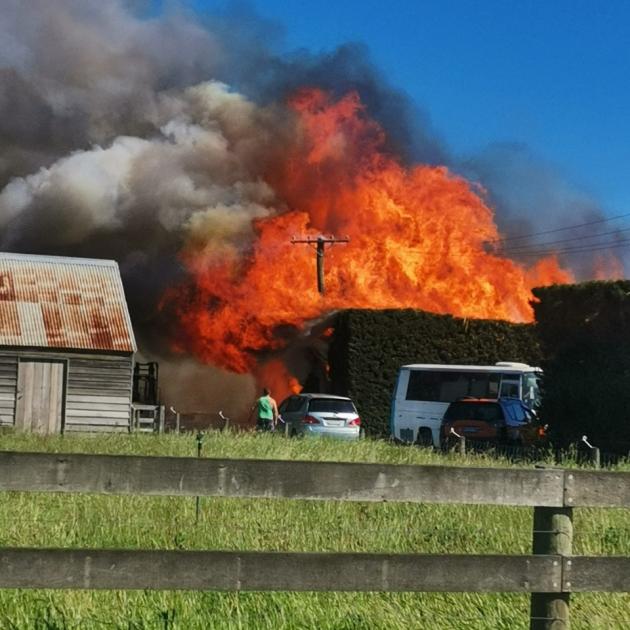 An eight-year-old’s birthday party became a nightmare when a barbecue turned into an inferno. Photo: Photo: Kerry Cameron
"Fire, fire" came the call from Danny Morris’ son. Morris ran outside - and within minutes he was fighting to save his home.

The fierce blaze on a lifestyle block near Lincoln is believed to have started from a home-made barbecue, which Morris had lit to celebrate his son Zechariah’s eighth birthday.

People at the scene last Tuesday frantically moved their vehicles out of the way as explosions rattled around them.

Eight fire appliances and crews attended. A work shed and a farm shed were destroyed, along with a tractor, caravan, van, forklift and car.

He said he was not insured.

However, when he considers the ferocity and speed of the blaze, he feels blessed it wasn't worse.

"It would have gone up like a blooming fire cracker," he said of the home where he lives with his wife and four children. 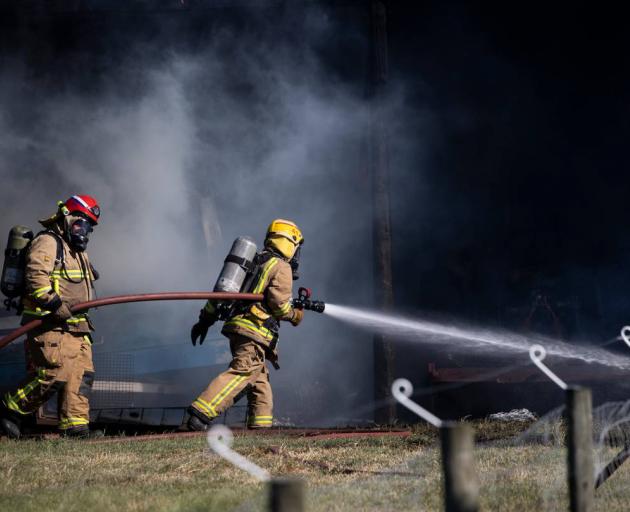 Firefighters battle the large blaze near Lincoln. Photo: George Heard / NZH
The reason it didn’t was due to the "tremendous" work of firefighters, and luck.

He said while the weatherboard villa’s window exploded, the paint blistered and spouting melted, the fire did not penetrate the wall near the blaze as this area happened to contain inflammable fibrolite.

He said the ordeal began about 4pm on November 16 as he was preparing to hold the birthday barbecue outside.

About 15min after he lit a few pieces of gum timber in a steel square wheelbarrow and the flames quelled, ready for him to put a steel grate on top, he went inside to wash his hands. 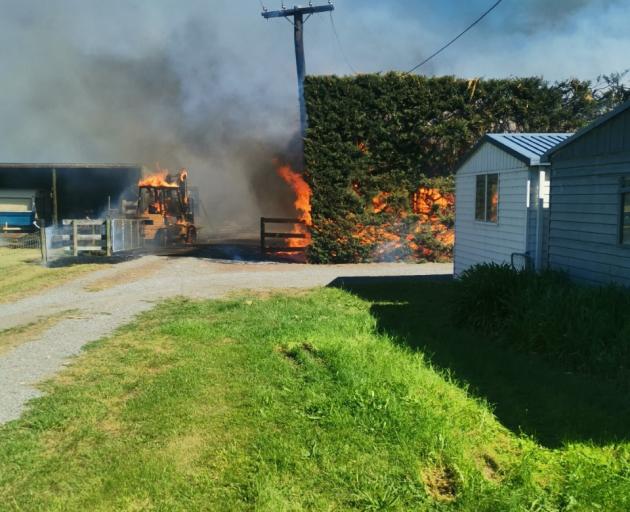 Photo: Kerry Cameron
That was when he heard his son yelling and he ran outside.

"I couldn’t even see the fire, I thought he was joking, I was about to tell him off," Morris said.

But he soon saw what Zechariah was looking at - the flames in a hedge about 5m away.

He said the wind had rapidly come up, and had all of a sudden carried a spark to the hedge.

He cranked up a water blaster, but the fire "just took off".

"As I was fighting it, it was so surreal, how the hell did we end up here?" he said.

Danny Morris can not believe how quickly the fire took hold. Photo: John Cosgrove
Passing motorists stopped to help, while his wife, neighbours and others phoned 111.

As the firefighters got to work, he stayed at the scene for a while "watching in disbelief".

Morris said he was proud of Zechariah for raising the alarm, and moving his two-year-old brother to safety with the rest of the family.

The items lost in the blaze included woodworking gear, tree cutting gear and machines, a forklift, welders, and a small car he was working on.

They were in the work shed on the lifestyle block on Greenpark Rd, which he and his family rented.

"I’m feeling pretty blessed, I’ve got good people around, my family is safe." 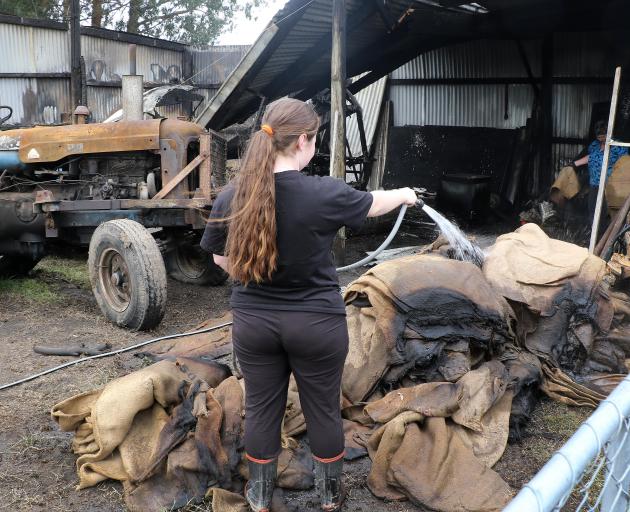 Neighbours helped dampen down items from their farm shed. Photo: John Cosgrove
One of the passing motorists was Kerry Cameron, of Springston.

Cameron helped out by driving a car out of a driveway.

He described the frantic efforts of others at the scene as there were small explosions and the blaze moved into the farm shed.

A couple of men managed to push a horse float out of the way, but could not start a tractor next to a caravan, so both of these were destroyed.

It quickly spread from the macrocarpa hedge to the farm buildings and came within 2m of the house.

Photo: John Cosgrove
"We managed to stop it spreading to the house," Greenwood said.

Greenwood said the macrocarpa hedge was "like a can of petrol".

Firefighters had the blaze under control within an hour and spent four hours at the scene.