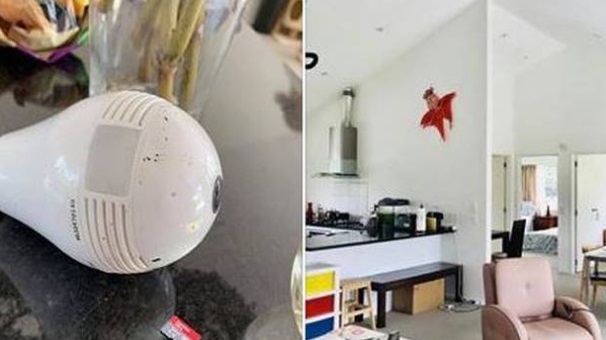 A buzzing sound from the lightbulb, left, alerted the occupants to the camera. Photo via NZ Herald
Members of a bridal party preparing on the wedding day were shocked and angry after discovering a camera hidden in a light bulb at their Airbnb accommodation.

Auckland photographer Michael Kouk told The New Zealand Herald he was at the rural West Auckland property capturing the bridal party getting ready for the special day when he heard a strange noise coming from the kitchen.

He described the sound as being like a "low-level buzzing sound".

Kouk looked up and noticed a large black dot on the light bulb.

On closer inspection he discovered that it was a 360-degree spy camera with a 32GB memory card.

Everyone at the property was stunned.

"They were shocked and angry. Even myself. It's totally invading their privacy."

Kouk said the bride had lodged a complaint with police.

The bridal party's angst was exacerbated by the owner walking in and out of the house, and wanting to renege on a written deal that they could stay at the house until 2pm, Kouk said.

Kouk said the owner wanted them all out by 1pm. However, the group were allowed to stay the extra hour.

The group were leaving that same day so didn't plan on staying another night which was fortuitous, he said.

Choose a professional accommodation operator.
Air B & B is just some random type's home.