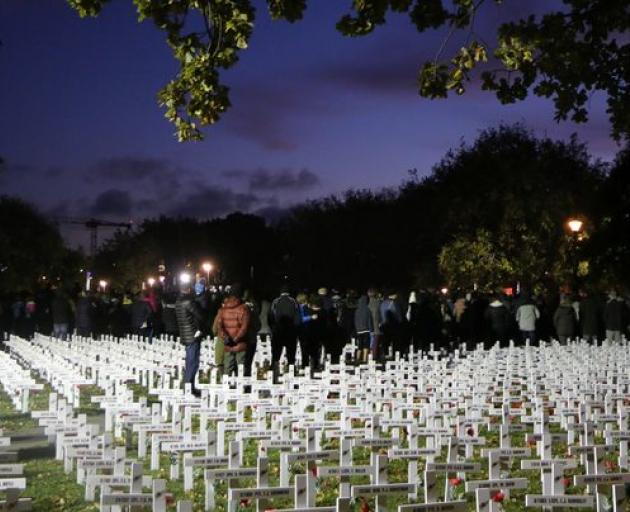 Anzac Day commemorations in Christchurch last year. Photo: RNZ
It will be up to communities whether they choose to reduce Anzac Day services for security reasons, the RSA says.

The Royal New Zealand Returned and Services' Association approached police shortly after the Christchurch mosque attacks on March 15 for advice on the national commemorations.

Leaders met on Thursday, and the RSA's chief executive, Jack Steer, said the advice they received was to consider consolidating the number of events being held.

"Their concerns are from a security perspective for people. These events can lead to repeat copycat events but they've done a lot of research, a lot of study, and they don't see any direct threat to any Anzac specific service.

"But they did say to us that they want to work with our people organising, the councils, the RSAs, to try to manage the demand on their resources. It might be that prioritising services, maybe consolidating some of them, will allow police to do their job even more effectively than they do it at the moment."

In a statement last night about plans in Auckland, Superintendent Karyn Malthus said "in the current environment" the police would continue to have a visible presence nationwide for safety and reassurance.

"We recognise the public will want to commemorate Anzac Day across the region and we are wanting them to do that in the safest way possible, which may mean some have to travel a little further to an event."

The advice was passed on to RSAs throughout the country on Thursday afternoon, however Mr Steer said there was no set directive.

"This is a community event and the communities will make their own mind up based on the advice they've already received."

Mr Steer said some people would be upset, and others would not want to go.

"Our concern is that people in our country are able to attend ceremonies like this and feel safe while they're doing it.

"However, this year we've just had a terrible series of events really close to Anzac Day, and the poppy appeal and a whole number of other events. We just have to take notice of people's feelings and people just have to do the best they can.

"So if it's easier to consolidate to reassure people and make [the police's] job easier then I think that's the right thing to do."

Plans would firm up in the next week or so and people would be advised.

"It'll be advertised where events are happening and where perhaps there's been some combining or consolidation and that'll help the people of New Zealand to make their own choices," Mr Steer said.

Auckland Council said it would be working closely with the police and the RSA.

"The advice that we are receiving from police relates specifically to organised commemorative events that draw significant numbers," its general manager of arts, community and events, Graham Bodman, said.

"This will not affect individuals wanting to pay their respects at sites of their choosing outside of organised dawn and civic service events."

The council said event details would be finalised and a further announcement would be made next week.