Century-old fruitcake from Antarctica on display 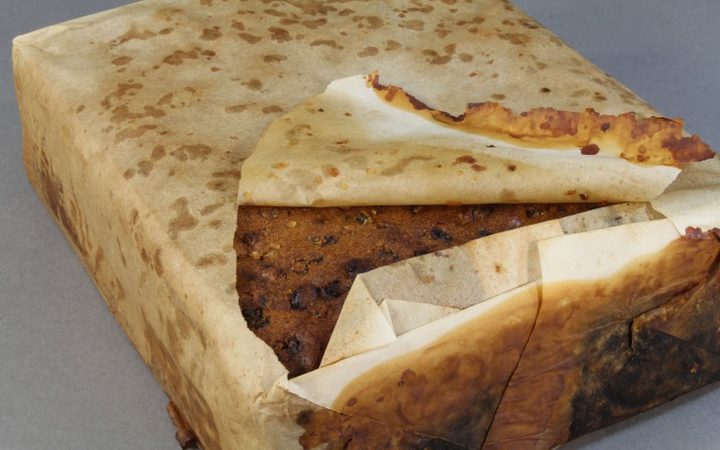 Fruit cake found at Cape Adare thought to be from Scott's Northern Party (1911). Photo: Antarctic Heritage Trust via RNZ
A well-preserved fruitcake which sat in a hut in Antarctica for over a century will go on display at Canterbury Museum from today, before it is sent back permanently to the frozen continent.

The cake is part of an exhibition of items recovered from two huts at Cape Adare, the first buildings on Antarctica, which were used during expeditions led by Norwegian Carsten Borchgrevink in 1899 and Captain Robert Falcon Scott in 1911.

In 2016, a team from the Antarctic Heritage Trust started a long process of conserving items from the huts, before starting the preservation of the huts themselves.

The exhibition at Canterbury Museum, called Breaking the Ice, will predominantly tell the tale of Carsten Borchgrevink's Southern Cross expedition, and will also include scientific equipment, clothing and sledging supplies.

The cake is believed to have been brought to Antarctica in 1911 by Scott's team, and in order to preserve it, the cake it will remain safely shut inside its tin.

When the cake was found by conservators in 2017 the team said it was in "excellent condition" and smelled edible, although the tin was rusted.

Also on display will be a long forgotten watercolour of a Treecreeper bird, painted by Dr Edward Wilson, who died alongside Scott in Antarctica in 1912.

Under the government permit the items must be returned to the huts in Antarctica, so this will be the only chance for the public to see these items.

The exhibition will run from 18 May until 13 October.