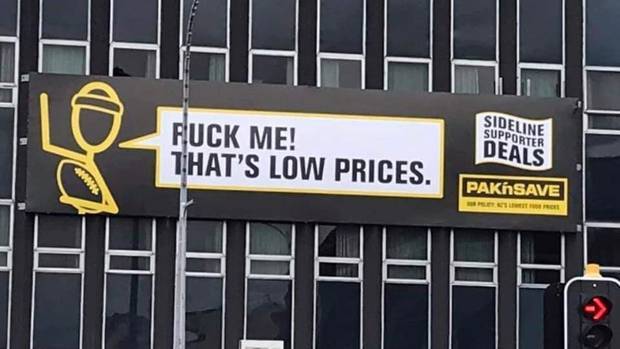 The ad also caused a bit of controversy in Palmerston North. Photo: NZH File
Pak'nSave is in hot water with the Advertising Standards Authority over the use of the phrase "ruck me" on a billboard advertisement.

The complainant in the case expressed concern about the use of "smutty innuendo in public advertising".

The ASA deemed the use of the phrase "ruck me" offensive on account of it acting as a euphemism for the word f***, which ranks 13th on the Broadcasting Standards Authority list of language that may offend.

In related news, this billboard was also the subject of some controversy in Palmerston North, where an awkwardly placed lamp post led to some confusion about what it was actually saying.

Pak'nSave defended the ad, saying that it was not offensive or indecent and that it was simply a rugby reference used to humorous effect.

The complaints board disagreed, pointing out that while the word "ruck" is associated with the game of rugby, the term "ruck me" is not.

The board also referred to precedent, featuring similar cases to have appeared before the ASA.

In one of the cases, a large outdoor poster for Remedy Kombucha showed a photo of a hand holding a bottle of the drink, with text saying: "Tell sugar to get Fruct".

In this case, the use of the word was also deemed offensive because of the use as a placeholder for a more offensive alternative.

An important consideration in all these cases is their location in public spaces, which means they can be seen by anyone in the vicinity, including children.

The Pak'nSave advertisement only ran during the Rugby World Cup tournament and was no longer on display.

In deciding to uphold the complaints, the ASA also stated that the ad should not be used again.