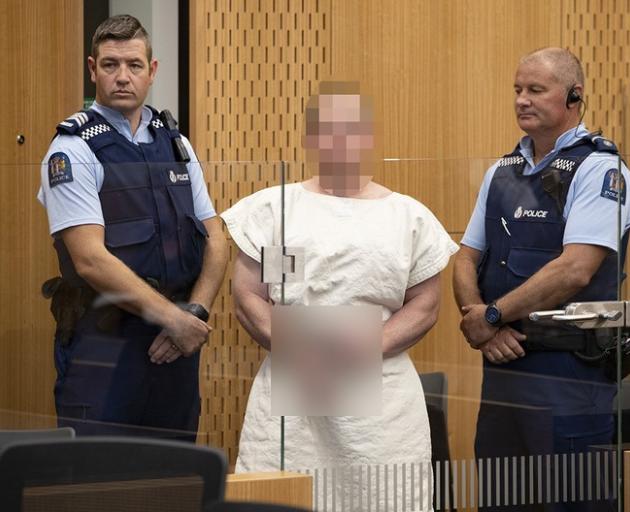 Brenton Tarrant making a sign to the camera during his appearance in the Christchurch District Court. Photo: NZME
A 28-year-old man has appeared in court this morning charged with murder after yesterday’s Christchurch mosque shootings.

Brenton Harrison Tarrant, whose address was given as Andersons Bay in Dunedin, made an appearance from custody at Christchurch District Court.

He appeared in white prison clothing, with manacled hands, and barefoot. He smirked when media photographed him in the dock, flanked by two police officers.

Tarrant is accused of murdering a man, whose name was suppressed by Judge Paul Kellar on grounds of undue hardship to his family, in Christchurch yesterday.

He was remanded in custody without plea to the High Court in Christchurch on April 5.

However, while Judge Kellar granted in court photographs and filming, he ordered that his face be pixellated to preserve any fair trial rights.

No occupation for Tarrant was listed on the charging document.

The courtroom was closed to the public.

Three approved New Zealand media outlets were granted in-court applications to film and take photographs. They were escorted into court by security staff.

The judge briefed media before the hearing.

There was a massive media presence outside court this morning, including many international news outlets.

Only accredited media were allowed in court today.

There were armed police in court this morning.