Controversy after cause of SkyCity fire revealed

A gas torch accidentally left cardboard material smouldering on top of the under-construction Sky City convention centre, leading to a massive blaze, a report released today says - but a contracting firm has already rejected the finding.

The cardboard core of a waterproof roofing membrane roll smouldered for more than half an hour during a lunch break before it burst into flames, causing the 10-day fire, says the Fire and Emergency NZ report.

The cardboard roll had been inadvertently exposed to a worker's gas torch and it smouldered undetected for 38 minutes, according to investigators.

Fenz released the report into its investigation into the fire which started on October 22, saying it was accidental - but the report has already been rejected by one of the contracting firms, who says it needs to be retracted.

Fenz region manager Ron Devlin said: "We eliminated anecdotal speculation at the time that an inexperienced contractor caused the fire by leaving a blowtorch going prior to leaving the area for lunch. This did not happen.

"Our investigators found all gas bottles around the origin of the fires were turned off for the lunch break. There were no inexperienced contractors working in the area at the time."

Video footage from the morning showed roofing contractors rolling out the cap sheet on the western and eastern sides of the roof. Work was being done at 12.36pm, then both workers left the area at 12.39pm, the report said.

The cardboard centre of the roll that had ignited had smouldered for 38 minutes before reaching flaming combustion and providing sufficient heat to ignite the roll of cap sheet membrane to a point of self-sustaining fire.

"This time delay is consistent with tests and a recreation conducted by FENZ. Strong gusting winds then contributed to a rapid and significant spread of fire across the roof," the report found.

The almost-finished level five concrete slab floor stopped the fire spreading throughout all levels - but water went through the entire building.

The fire started in the gutter area on the western side of the top of the seven-level centre and quickly spread to the roofing membrane, being fanned by strong gusting winds.

Wind played a key role in the development of the initial fire and its spread across the roof.

Once established, the fire burned through the various layers of the roof and spread through the building via direct drop-down burning materials into cavities in walls and ceilings, on to construction equipment with many gas cylinders, petrol-fuelled lifts and other equipment. 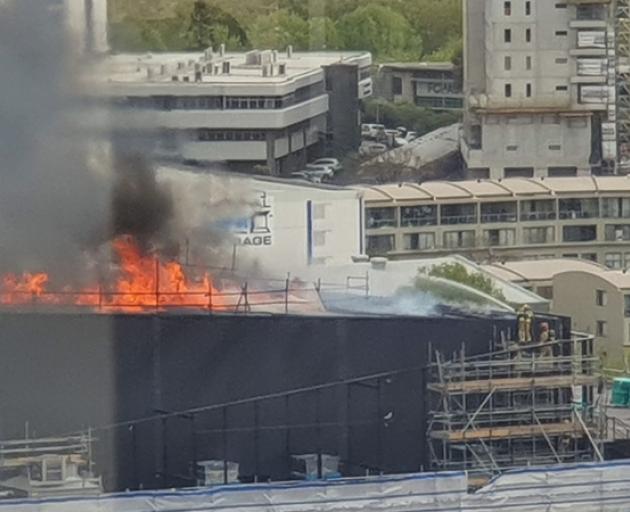 The firs started on October 22 and burned for several days. Photo: NZ Herald
Workers were applying the top layer of waterproofing membrane known as the cap sheet on levels six and seven.

These layers are a flexible waterproofing membrane improved with Atactic PolyPropylene. The application process required the product to be preheated which softens the underside causing it to adhere to the surface it is being applied to. When the cap sheet is laid, both the base sheet and the cap sheet are heated which facilitates the bonding of the products together.

But contracting firm MPM Waterproofing has objected to mention of materials and workers and has demanded Fenz withdraw the report.

"Immediately following the International Convention Centre fire in October 2019 a number of inaccurate statements were made and reported in the press in relation to the cause of the fire and those people responsible for it," MPM said today.

"MPM Waterproofing has now been provided with a copy of the official report. FENZ investigators say they 'believed' the cause of the fire to be 'an inadvertent ignition of the cardboard centre of a roll of waterproofing membrane'," the company said.

MPM Waterproofing had reviewed the report "and believe it contains a considerable number of factual inaccuracies. As with the initial suggestions as to the cause of the fire already referred to, MPM Waterproofing has voiced its concern to FENZ about the content of the report and the accuracy of the conclusions made in it," it said.

At its peak, nearly 30 appliances and about 150 firefighters battled the major blaze which took 10 days to fully extinguish.

"Our investigators concluded the fire started after the cardboard inner of a cap sheet roll was momentarily exposed to a flame from a worker's gas torch and began to smoulder," Devlin said.

After smouldering unnoticed inside the roll, an intense fire developed that burnt through the top layer of the cap sheet, and then spread across the level seven roof membrane.

Devlin said it was a significant step forward to have the cause and origin report completed.

"The NZ International Convention Centre fire was a complex and dangerous fire and we have been focused on ensuring the investigation into its cause was comprehensive and accurately reflected what occurred on the afternoon of 22 October. An independent peer review agreed with our findings.

"We can now confirm the cause of the fire was accidental and we hope this will assist in the organisations involved to move forward," he said.

Devlin thanked fire crews who worked on the fire during a 10-day period.