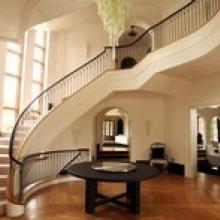 A staircase inside the Dotcom mansion. Photo / Janna Dixon
As Kim Dotcom prepares to fight back for his seized assets this week, the New Zealand Herald goes inside the inner sanctum where the multi-millionaire was at the time of the FBI-ordered raid.

Details of the arrest of internet mogul Kim Dotcom reveal a high-octane assault by Kiwi cops, who kicked in doors and rousted nannies from bed at gun point.

There are claims the US-instigated raid also separated Dotcom's 27-week pregnant wife Mona from her children and held her under armed guard in the rain.

Dotcom has labelled the "surprise assault operation" by about 80 police officers as unnecessary and "remarkable in its inappropriateness".

He said police staff on the January 20 raid would have known of the vulnerability of his wife, who is pregnant with twins. An ambulance took her to hospital that night complaining of cramps and pain.

Dotcom will this week begin the fight to regain some of the millions of dollars seized in the worldwide raids.

Papers have been filed with the High Court at Auckland which claim freezing orders used to seize his fortune have gone too far and money should be returned.

Yesterday, the Herald on Sunday was given exclusive access to the Coatesville mansion, north of Auckland, and members of the 50-strong staff who worked there.

Dotcom is behind bars awaiting extradition to the US on charges of copyright infringement. His security chief, Wayne Tempero, is facing a firearms charge after officers found two shotguns in gun safes fitted with pistol grips.

Dotcom said he met Orewa community Constable Jason Homan the day before the raid. He said it was later discovered Homan secretly filmed the mansion to provide intelligence for the raid.

In documents on the court file, Dotcom said the recording meant police were aware of the "vulnerability of my wife".

"In that state she was particularly susceptible to any anxiety and distress or shock such as must have been anticipated to have been the result of the strategy and tactics employed by the authorities."

He said the assault failed to take into account "the safety, welfare and wellbeing of my wife and children".

He said she and her children had moved to another house on the property for the evening when she began to experience abdominal cramps.

Landlines at the property had been cut off, cellphones confiscated, and all vehicles removed.

Tempero said he went to the mansion about 10.30pm to ask remaining police for help. "I went to them and said Mrs Dotcom needs to go to hospital. They said you need to ring 111 and call an ambulance," said Tempero.

He returned to the other house where, eventually, a cellphone was found. It took more than 30 minutes for an ambulance to arrive and take her to North Shore Hospital.

He said the raid featured "cowboy" police officers wearing T-shirts, jeans and even a fitted bandana known as a durag, popular in US street culture.

Tempero said the officers who kicked in unlocked doors and rousted nannies from bed with M4 automatic rifles "needed to get a new job".

"It was a home invasion by New Zealand police at the urging of the United States Government," Tempero said.

"If they had just turned up to serve the warrant, Mr Dotcom would have complied."

Tempero took the Herald on Sunday on a tour showing the path taken by police officers.

He said the first sign of police arriving was the scream of rotor blades as a helicopter landed outside the house, whipping white dust and pebbles into a cloud.

He said he could barely make out the helicopter hovering just above the ground when two men in civilian clothing emerged in body armour with automatic rifles.

"Not once did they say they were police," said Tempero - contrary to the claims of officers.

Tempero said he was handcuffed while other armed police spread out through the mansion and across the property. From where he was cuffed on the ground, he could see armed officers running into the children's quarters.

The rooms used by the nannies, close to the children's room, have splintered door frames. The nannies have said the doors were unlocked and armed police stormed in shouting, "Do you have any guns or bombs?"

Tempero said he was cuffed and taken to a grassed area used by police to detain occupants. Security guards were brought from the front gate in a van with two police dogs.

Other staff were brought out - some cuffed and others not - as four teams of armed officers took separate entrances into the mansion where they faced locked doors. The Dotcoms' quarters were private, with some doors sealing automatically.

Officers hammered at the Dotcoms' bedroom door as, across the grand stairwell, Mona Dotcom emerged from the room she slept in during her pregnancy. "She thought he'd had a heart attack or something had happened in the pool," said Tempero.

She was able to put on a dressing gown before being led downstairs to join others on the grass.

Tempero said the pregnant woman stood for about an hour in drizzle, overseen by two armed police officers.

Officers had also secured Mona Dotcom's two younger brothers, aged 11 and 14. Tempero said the boys were playing XBox in Dotcom's games room when confronted by officers, who directed them outside with rifle muzzles.

After a time, Tempero said he was asked where Dotcom was hiding. He said he initially told officers he did not know because he could not see the Mercedes-Benz car normally used to return Dotcom home.

When police continued to ask, Tempero said he agreed to show them the panic room built by the home's original owners.

Under standard security instructions, Dotcom was to take shelter in the panic room while Tempero secured Mona and the children.

He said he showed the officers the cupboard concealing the entrance to the panic room.

Next to it was a badly damaged dumbwaiter which officers mistook for the entrance and attempted to sledge hammer through.

After showing them how to get in, officers headed upstairs to arrest Dotcom.

He said Dotcom was brought out of the mansion and led past his wife Mona. Tempero, who was also there, said Dotcom spoke as he passed.

"He said 'copyright infringement' while shaking his head. He couldn't believe it."

Police are satisfied the right tactical decisions were made when Kim Dotcom was arrested, says the officer in charge.

Detective Inspector Grant Wormald would not reveal why police carried out the surprise assault. However, he confirmed the Special Tactics Group - the most highly trained armed officers in the force - were involved.

Dotcom's lawyer, Paul Davison QC, had already raised with him an allegation that officers had failed to help Dotcom's wife Mona. "It is a serious allegation. If that's the case, it's a matter I'd like to see resolved."

But he said Mona Dotcom's needs earlier in the day had been anticipated and considered. "I'm more than happy we had sufficient staff there and were able to look after her in a reasonable manner."

Wormald confirmed most officers were in civilian dress, but a few Armed Offenders Squad and £ officers were in black police-issue coveralls. The presence of an inspector in full dress uniform should have been assurance it was a police operation.

He was surprised it had taken two weeks for other new allegations to emerge. He was unaware of claims that nannies had been confronted at gunpoint or Dotcom's security guards had been transported with dogs.

"If these allegations are true, there is a manner in which a complaint can be made. I don't believe the accuracy is necessarily there."

He said the allegations would be investigated if a formal complaint was made.