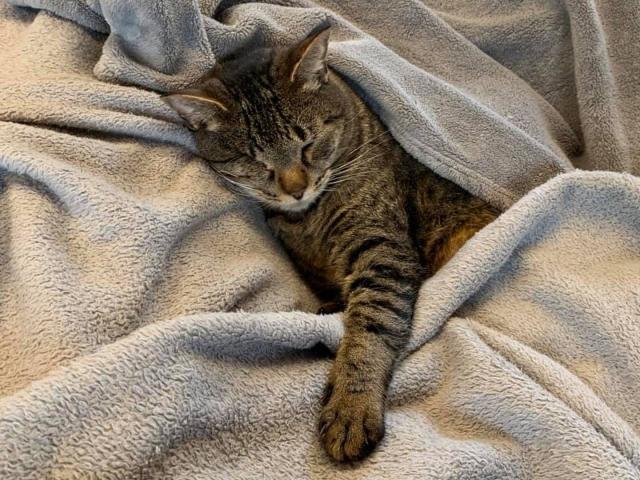 Muffin
Fulton Hogan, contracted to dispose of dead animals on Auckland's streets, are investigating after an employee threw a distraught family's dead cat into a ditch.

A Titirangi couple's perseverance to recover their one-eyed cat Muffin, which was hit by a car and killed last weekend, uncovered what they say are "appalling" practices by the Henderson branch of Fulton Hogan.

The couple claim they discovered "multiple bones including a full rib cage suspected to be from a domestic dog" in the ditch.

Fulton Hogan have given their "sincere apologies" to the family for what they admit is a breach of "common decency".

Auckland Transport told the Herald it was "a really distressing situation", but would not comment on their ongoing contract with the company until its "employment discussions" had finished.

The couple were alerted to the death of Muffin after putting the call out for her whereabouts on a community Facebook page, after she went missing last week.

"Replies to my post in search of Muffin on our local community Facebook confirmed our worst nightmare," the owner told the Herald.

"A kind local uplifted Muffin from the road and placed her on the grass verge.

"Unfortunately, I was 24 hours late with my post and despite rushing to the location, her body had gone."

After contacting the Auckland Council the owners claim they were told: "Unfortunately, the cat was mangled and therefore our contractors buried her in Huia without scanning for a microchip."

Muffin, who had a Facebook page dedicated to her exploits around the family home, did have a microchip.

After four calls to council to try and get her body back, the couple were directed to Fulton Hogan who they expected to take the cat to the local Animal Welfare Centre in Henderson.

The couple say they were then informed by the company's Henderson Valley branch manager that: "their employee had disposed of the cat by throwing her down a cliff in dense bush on Lone Kauri Road. The employee claimed the cat was in two pieces."

Muffin's owners said they then travelled to the region in the Waitakere Ranges with company staff and abseilers to retrieve the cat's body.

"The employee who discarded my cat like a piece of trash is there, he isn't willing to assist with the search, he isn't providing details as to where exactly or how far he threw my cat," one of the owners said.

"He isn't engaging with the search instead he is sheepishly looking at a fellow colleague when we ask questions and both employees are avoiding eye contact with us."

But about an hour or so later they were informed that Muffin has been found in a ditch 10 kilometres from the Henderson offices after staff reviewed the GPS tracking on the truck that did the job.

"For Fulton Hogan's employee to take us on a wild goose chase, describing their imaginary actions and fabricating sick details is beyond belief," the owner said.

"We just cannot believe that this is a one-off incident."

After being given back Muffin's body, the couple requested the GPS coordinates where she was retrieved from.

"We head to this spot and of course, even under torch light last night, just as our gut instincts were telling us, locate multiple bones including a full rib cage suspected to be from a domestic dog. I sent a photo [of the scene] to my vet," the owner said.

The couple are calling on the council to look into how long these practices have been going on by Fulton Hogan.

Fulton Hogan's Auckland regional manager Gavin Riddle told the Herald they have investigated the incident in the Waitakere area where they hold the road maintenance contract.

"The actions of the individual concerned are contrary to common decency and our company values and procedures around how we recover the bodies of pets, and we are currently dealing with the individual in an appropriate manner," Riddle said.

"We have expressed our sincere apologies to the family for the distress they have been through, and have also reiterated to our teams the duty of care we have when collecting deceased animals from the roading network."

Fulton Hogan was founded by Julius Fulton and Robert Hogan in Dunedin in 1933, and is now headquartered in Christchurch, with 100 locations worldwide.

No guesses as to which employee will be terminated when the first round of redundancies hits Fulton Hogan Henderson Branch!