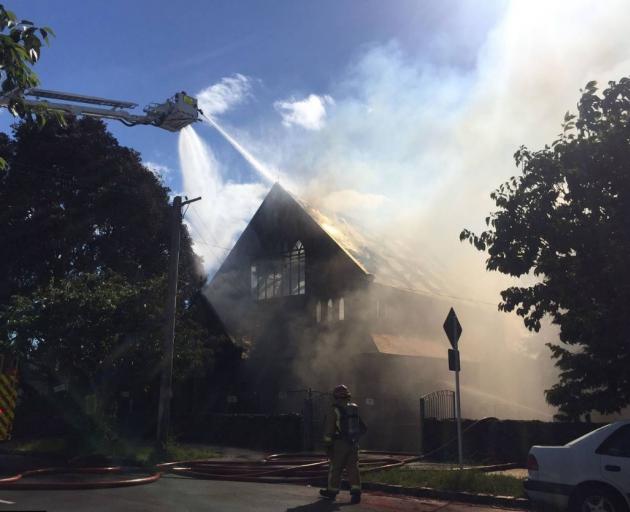 Firefighters attend the blaze in Mt Eden. Photo: NZME
Fire crews are battling a "huge" fire that has engulfed a heritage-listed church building in the Auckland suburb of Mt Eden this evening.

Eight fire engines and dozens of firefighters are working to bring the inferno under control.

Flames and billowing smoke are visible from across the city.

Witnesses described how clouds of black smoke were billowing into the sky, with one saying "the flames are absolutely huge, I'd say it's getting other properties".

The fire is at St James Presbyterian Church on Esplanade Rd.

A Herald reporter at the scene said the building was well involved.

"The church is black. The whole sky is all brown and black when we showed up.''

Photos of the blaze show flames leaping from the building and clouds of black smoke snaking into the air.

A crew member can be seen on a cherry picker, where water is being sprayed over the blaze.

"It stinks like smoke and there's a burnt, horrible smell in the air."

About 100 members of the public are looking on as firefighters work at the scene.

Just after 5pm, it appeared firefighters were heading into the building.

Witnesses said the building was the church hall but was not used by the church because Auckland Council deemed it unsafe. They said squatters live in the hall.

The witnesses were in church this morning before going away for lunch, however, they spotted the flames and decided to investigate thinking it was a house fire.

Upon arrival the witnesses said they were "surprised and shocked".

A man who lives about a block away told the Herald he was at home early this evening when he noticed cars stopping on the road.

He looked out to see smoke and flames jumping out of the church building.

"It happened so quick,'' the witness said.

Firefighters remained at the scene, at 5.30pm, and were still working to secure the building.

There are no more flames. But there is a lot of grey smoke billowing out towards the city and a bad stench.

In February the Herald reported that people had been warned to stay well back from the church's historic but "dangerous" Auckland Sunday school hall whose repairs no one had been willing to finance.

Developer View West wants to build several apartments within the St James church building on the corner of View and Esplanade Rds. It also wants to demolish the hall fronting Esplanade Rd and build more apartments there.

Both buildings have a B-grade heritage listing with the Auckland Council. Both are owned by the Presbyterian Church Property Trustee. The council assessed the property's capital value to be $6 million last year.