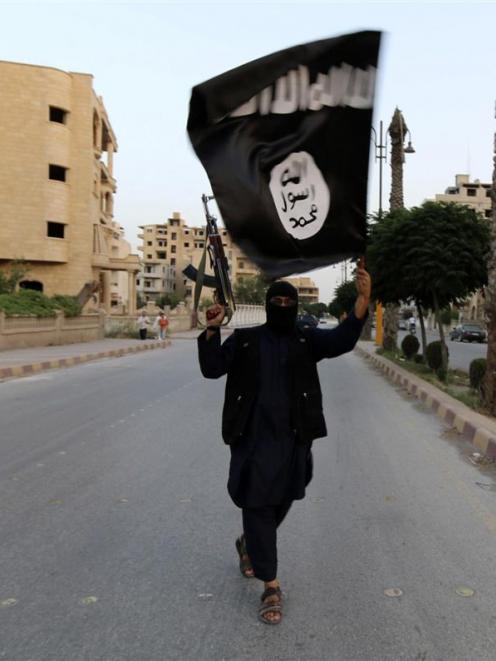 A member loyal to Islamic State waves the group's flag in Raqqa, Syria. Photo by Reuters
An increasing number of New Zealand women are heading to Iraq and Syria, SIS director Rebecca Kitteridge told the intelligence and security committee today at Parliament.

But she did not know whether they were going as "jihadi brides", to fight themselves or to support Isis fighters.

"What has changed over the last year is that the issue of New Zealand women travelling to Iraq and Syria wasn't something we have seen previously or been aware of previously," she said.

Speaking to reporters later she would not quantify the number but confirmed it was less than a dozen.'

She would not comment on whether had any had returned to New Zealand.

She said the extent to which the SIS knew about any of them returning "of course we would maintain an interest in those people" but the SIS did not know about every single person.

"Obviously we would be concerned with whatever they are doing in a war zone of that kind.

"There would be really significant concern about what they are being exposed to, the conditions that they are in, their ability to get away if they want to or how heavily [they are] radicalised or exposed to acts of barbarism.

"For a whole range of reasons it is a real concern to us."

Ms Kitteridge offered her remarks in her initial presentation then elaborated on them when Mr Key asked about the type of people the SIS watched as a security risk.

"They may have other problems in their life," she said.

"It's not your kind of average person who's going out to work, or happily married or raising their kids.

"I would say there is a pattern of people who seem kind of disengaged in some way with productive life."

There were a range of age and a range of backgrounds -- "quite a diversity of people actually."