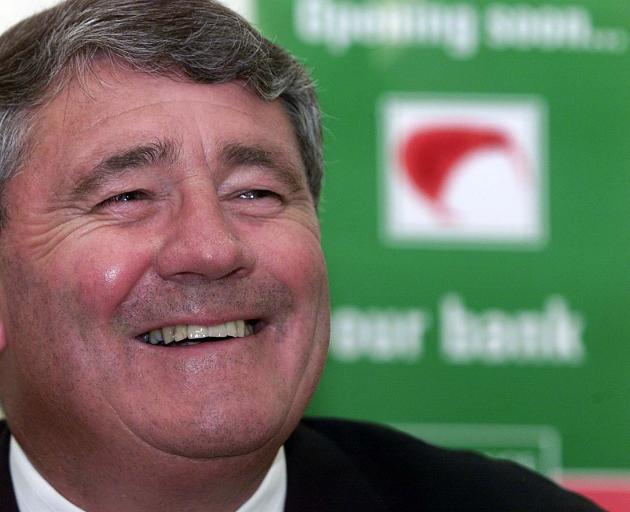 Deputy prime minister Jim Anderton is all smiles in February 2001 as his Kiwibank is given the go-ahead. Photo: ODT
Jim Anderton's son Chris says he has been overwhelmed with support after his father's death at the weekend.

And for those who cannot attend the public funeral tomorrow, it is being streamed live on YouTube.

Writing on Facebook this morning, Chris Anderton thanked people for the messages of supported he had received:
"They uplift me."

Anderton was two weeks shy of his 80th birthday when he died peacefully in Christchurch, a city he had served as the Sydenham and Wigram MP from 1984 until his retirement from Parliament in 2011.

A Requiem Mass will be held for Anderton at Sacred Heart Catholic Church, 70 Spencer St, Addington, Christchurch on Thursday at 2pm.

Prime Minister Jacinda Ardern, who will attend Thursday's funeral, called Anderton a man of "huge integrity, huge compassion, a man who stood strongly for what he believed in and gave 40 years of service both in local government and central government".

"He will be sadly, sadly missed by the Labour movement and by all his friends and family."

Close friend and former MP Matt Robson, who served in Parliament from 1996 to 2005 with Anderton's Alliance Party and then the Progressive Party, will be one of the speakers.

Anderton's legacy has been praised since his death, from his principled stance in 1989 when he left the Labour Party in protest over Rogernomics and the sale of BNZ, to his championing MMP as leader of the Alliance.

His work in the Helen Clark-led Government included helping to set up KiwiBank, the NZ Superannuation Fund, paid parental leave and several regional development initiatives such as the Marlborough Wine Research Centre.

After he retired, he served as chair of the Stadium Trust and pushed for the rebuild of the ChristChurch Cathedral.

Last year Anderton was made a Companion of the New Zealand Order of Merit for services to Parliament.

He will be buried on Waiheke Island on Saturday.