By Mike Houlahan
3 Comments
]Labour's first Budget unrestrained by the brake of a coalition partner fires up a head of steam for many of its traditional supporters.

Finance Minister Grant Robertson yesterday announced major income boosts for students and beneficiaries, major funding boosts for education and health and substantial infrastructure investment — including building a wagon assembly facility at the KiwiRail workshop in South Dunedin and a maintenance hub in Christchurch.

There were rewards aplenty for party faithful, who chaffed at three years of having to mollify New Zealand First and wanted to see Labour use its Parliamentary majority to deliver something approximating the transformational change its rhetoric has promised.

It is certainly a tribal Labour document, in which Mr Robertson upped the ante on his party’s "nine years of neglect" taunt of the National opposition.

As early as paragraph three, he claimed that he was starting to reverse the reforms of former National Party finance minister Ruth Richardson’s "Mother of all Budgets" from 30 years ago, a claim Prime Minister Jacinda Ardern also made minutes later. 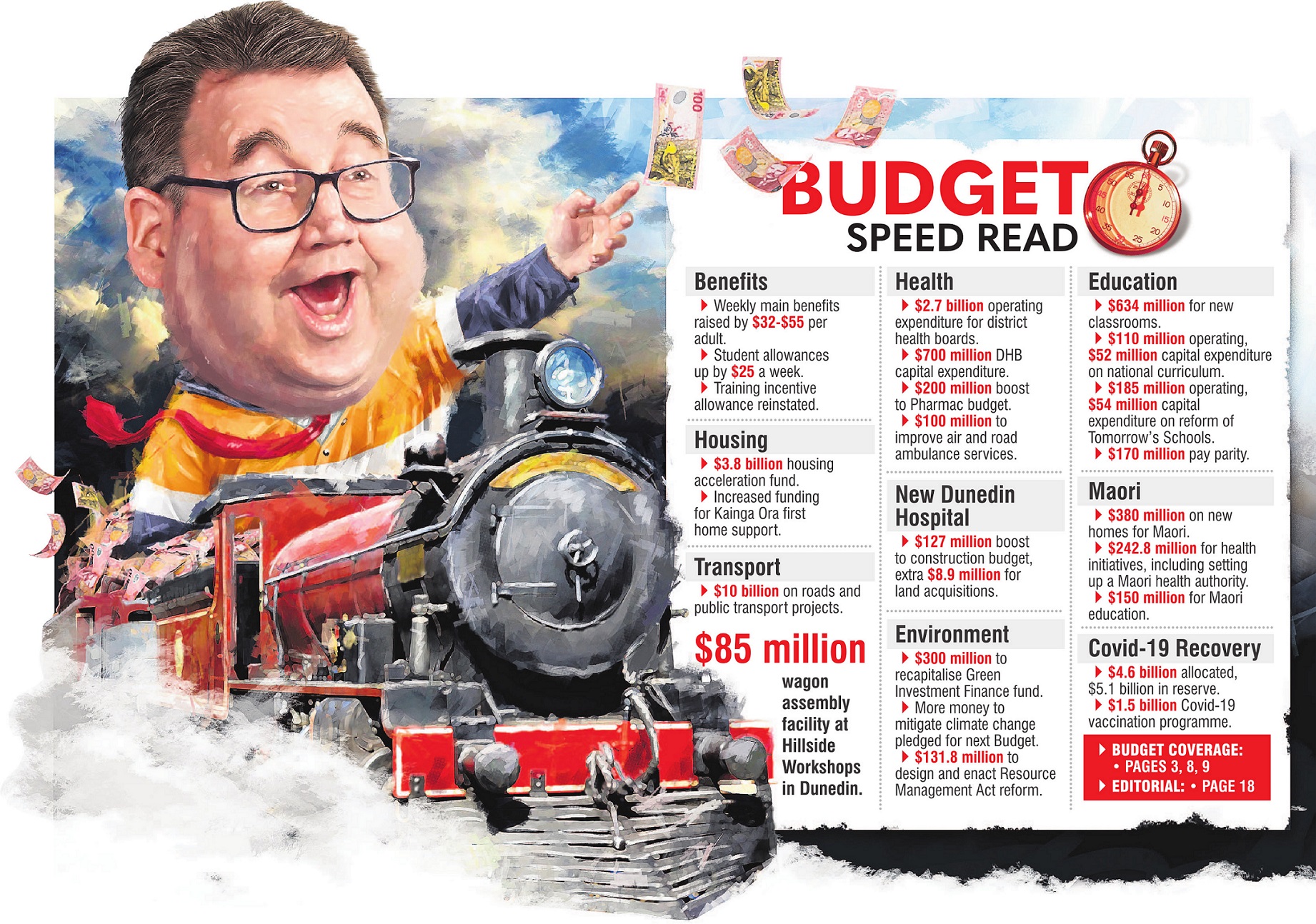 Budget 2021 does no such thing. In a pandemic world, inherently cautious economic managers like Mr Robertson and Ms Ardern are not going to do anything as radical as Ms Richardson did three decades past.

However there are unmistakable, if pale, shades of a progressive agenda and enough stirring talk to, probably, keep Labour’s troops happy for now.

Mr Robertson has stressed this is the first book in a Budget trilogy: the Budget is replete with "watch this space" promises for 2022 and 2023 on sectoral reforms and climate change mitigation but with no specifics, so he can safely step back from them if Covid-19 wrecks his plans.

The pandemic was not front and centre as it was in Budget 2020 but it was certainly visibly lurking in the wings: no-one wants a curtain call, and a $1.5billion vaccination programme and a $5.1billion contingency are a substantial investment in preventing that.

Covid-19 has not wrought as much damage on the national bank balance as forecast, which allowed Mr Robertson unexpected licence to splash some cash.

Much of that will go on the biggest increase to main benefit rates in decades, including student allowances — something of vital importance in the South where tertiary education is crucial to regional financial wellbeing.

Economic activity has bounced back strongly after the initial shock of the pandemic, and Mr Robertson has anticipated that those benefit hikes will sustain and build upon that.

While there is substantial new spending in Budget 2021, Mr Robertson has also offered a sneak preview of the future books in his trilogy.

Several sectors — notably climate change, health, education and Resource Management Act reform — have been identified as areas where there will be ongoing substantial expenditure over the next two years.

There should be little mystery about where the Government’s fiscal focus will be in the future.

Mr Robertson has tried to be responsible and precautionary on the one hand and ambitious and wide-ranging on the other.

That is probably an impossible task, but Budget 2021 has enough elements from column A and sufficient from column B to satisfy those who called for one approach or the other.

At the moment, the New Zealand economy, which looked in danger of derailment 12 months ago, is chugging along relatively serenely.

The train set Mr Robertson bought yesterday, along with other Budget initiatives will, he hopes, keep things on track for him to complete books 2 and 3 without the need for any shocking plot twists.

Biased much? I don't recall a headline 'National rewards it's faithful" when they dished out tax cuts.

You may need to have a disprin and sit down then, as it seems you are losing your memory

Looks like anyone with jobs paying over 50k better knuckle down and start doing some overtime to pay for all the taxes these guys require. Middle NZ fleeced again by the lefties