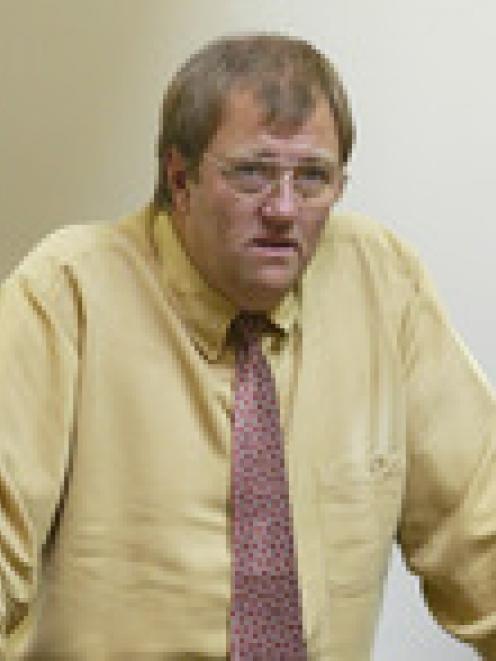 Mark Lundy. Photo / Mark Mitchell
A forensic computer expert says a virus was the reason why files on the Lundy family computer were out of order - rather than the allegation that Mark Lundy tampered with the machine to create a false alibi.

The last person to use the computer was Christine Lundy who turned the machine off in her Palmerston North home at 10.52pm the night before she was found murdered along with her daughter Amber, the Privy Council was told.

The timing is crucial to the case as Crown pathologists estimated the pair was killed between 7pm and 7.15pm.

However, a police computer expert at Lundy's trial in 2002 said there was evidence that the file registry in the computer was disordered which suggested the time on the machine was tampered with.

Maarten Kleintjes demonstrated to the jury how it was possible to tamper with the computer and manipulate the 'shut down' time on the clock that was undetectable - giving Lundy an alibi.

He also said it was "far-fetched" that a computer virus could disorder the registry files.

He did not know of such a virus, and found no sign of a virus on the Lundy computer.

However, defence lawyer David Hislop QC told the Privy Council last night that a computer expert, hired for the appeal, said there were a number of ways that files could become disordered - including a virus.

Forensic examiner Michael Chappell discovered that the virus-checking programme on the Lundy computer was out of date, and was in fact infected with a virus known as a KAK worm.

He traced it back to an infected email some six weeks prior to the killings in August 2000.

Timing is crucial to the prosecution case. If Christine Lundy shut down the computer at 10.52pm and a computer virus affected the registry files - rather than Mark Lundy tampering with the clock - then he would have an alibi.

Earlier on the second day of the appeal, Mr Hislop strongly criticised the evidence of two scientists who gave evidence at Lundy's trial in 2002.

Dr James Pang told the trial jury that he estimated the time of death between 7pm and 7.15pm on the evening of August 29, 2000.

This was based solely on the basis of examining the stomach contents of the murder victims - a full stomach containing potato chips and probably fish - and noted the "distinctive" absence of the smell of gastric juices.

He did not take the temperatures of the bodies when they were found in the house, or examine them for rigor mortis. He also failed to weigh the stomach contents.

Given the time of the purchase of the meals at McDonald's at 5.38pm and the journey time home, Dr Pang said the digestion process was in the early stages which led to his estimated time of death.

His evidence was backed up at the trial by Professor Gilbert Barbezat, a consultant gastroenterologist, who was confident the murders happened within an hour of the last meal.

Professor Barbezat had never carried out a post mortem examination, but had seen more than 100 of them.

The defence case at trial was that the murders happened after 10.52pm, based on computer time evidence, and therefore Lundy had a "cast iron" alibi as he was with a prostitute at his Petone motel a short time later at 11.36pm.

However, Mr Hislop told the Privy Council that the science used to identify the narrow window of the time of death was "fundamentally flawed" and "without any scientific foundation whatsoever".

He presented affidavits from several medical professionals, including Professor Bernard Knight, a leading world expert in forensic pathology, who reviewed the findings of the Crown experts.

He said that the use of stomach contents as an estimate of the time of death as "so unreliable as to be of little value" as a number of variables exist which make gastric contents almost useless to determine timing.

Professor Knight particularly questioned Dr Pang's evidence that "absence of gastric smell" was an important factor. He considered this to be "utterly without foundation and little short of ludicrous", and had never heard of this suggestion.

Mr Hislop said the stomach content evidence was "misleading" to the judge and jury. He also criticised Lundy's trial lawyer for not rebutting the evidence at the time.

Cellphone records show Lundy was in Wellington when he had an eight minute conversation with his wife which ended at 5.38pm.

The Crown said he made the 150km journey back to Palmerston North, killed his wife and daughter, then drove back to Wellington when records show he had a phone conversation with a friend at 8.28pm.

The Privy Council appeal had earlier been told about the police failure to disclose important documents and the science used to identify DNA matter as brain tissue.

Lundy is serving at least 20 years in prison after being convicted of the axe attack in August, 2000.

The non-parole period was lifted from 17 years by the Court of Appeal after his appeal failed.

Mr Hislop has finished his submissions and Cameron Mander, the deputy Solicitor-General of New Zealand, is responding on behalf of the Crown.

The three-day hearing is due to finish tonight.