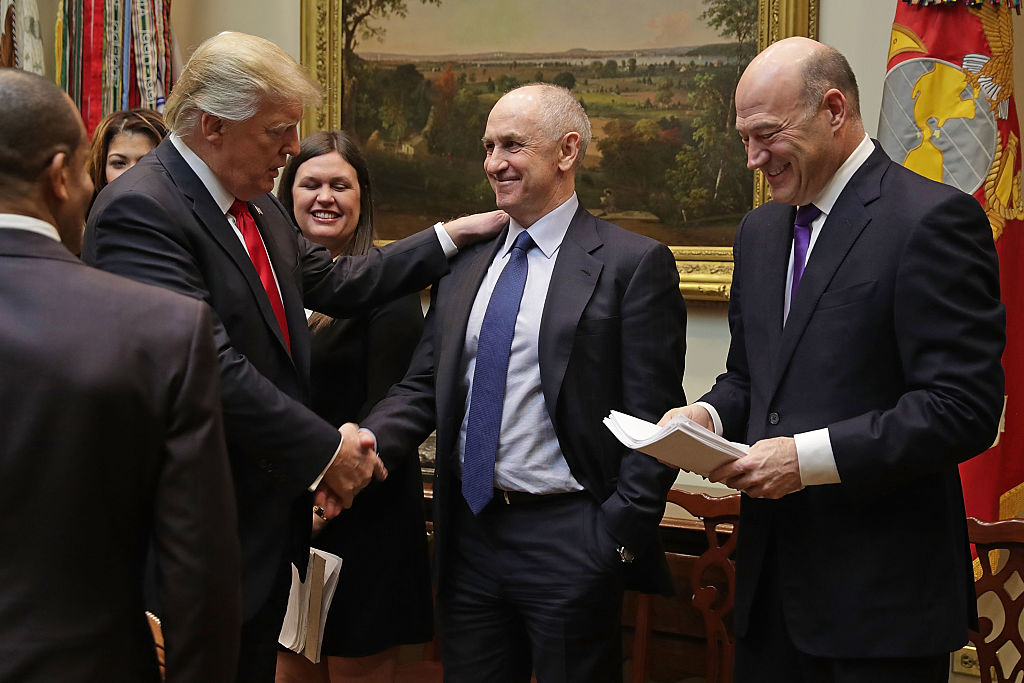 US President Donald Trump (L) with Chris Liddell (C) in 2017. Photo: Getty
New Zealander Chris Liddell has decided to stay on at the White House to ensure the transition to President-elect Joe Biden's administration proceeds smoothly.

The Deputy Chief of Staff to President Donald Trump has been in charge of the presidential transition process for the past nine months.

Liddell and National Security Adviser Robert O'Brien had been considering resigning their posts after yesterday's tumultuous storming of the Capitol by Trump supporters.

But both senior White House officials had come under pressure to stay on to ensure a smooth transition to the Biden administration, which is due to take power from midday on January 20.

"The transition of power from one administration to another is essential for the continuous operation of the Federal Government and is therefore critical to the country," Liddell told The New Zealand Herald.

"The planning of the transition has been my priority for the past several months, and for the next 12 days my focus is leading the successful transition to the new administration."

Yesterday, Liddell sent a memo to Cabinet agencies advising political appointees to prepare to resign on January 20 as part of the transition of power.

"As we prepare for a transition of power, we must take appropriate measures to ensure this is done in an orderly manner," the memo said.

A White House official described the letter as part of the normal transition process. But a well-placed observer of presidential transitions earlier told the Herald the memo should have gone out last month, but was held up by Trump's refusal to concede to Biden, which only happened yesterday after the Congress and Senate certified the results of the presidential election.

Trump now says he wants a "smooth transition" to the new administration. But he has come under fire from political opponents who would like to see him removed from office before January 20.

Liddell reached the top echelons of US business, serving consecutively as chief financial officer of Microsoft and vice-chairman of General Motors, where he led the company's global finance operations, including a successful US$23 billion IPO - at the time the largest in history - before he was appointed as an Assistant to the President after Trump's 2017 inauguration.

Bloomberg earlier confirmed Trump risked losing much of his White House staff to mass resignations after inciting a riot at the US Capitol yesterday, but top officials have decided to stay on to smooth the transition to Biden's administration.

"Most of Trump's senior staff considered quitting following the incident at the Capitol, according to people familiar with the matter," Bloomberg reported.

"But officials including National Security Advisor Robert O'Brien, White House Counsel Pat Cipollone and Deputy Chief of Staff Chris Liddell were concerned about what would unfold if they left early, the people said."

Bloomberg said O'Brien was seen as a bellwether, according to a person familiar with the matter. Had he resigned, many more administration officials likely would have followed.

Other political appointees across the administration weighed resignation, and many came to the same conclusion: while disillusioned by Trump and his behaviour, it was better to stay on for the good of the country - particularly considering the commander-in-chief's state of mind, according to people familiar with the matter.