Our whales wow US cameraman 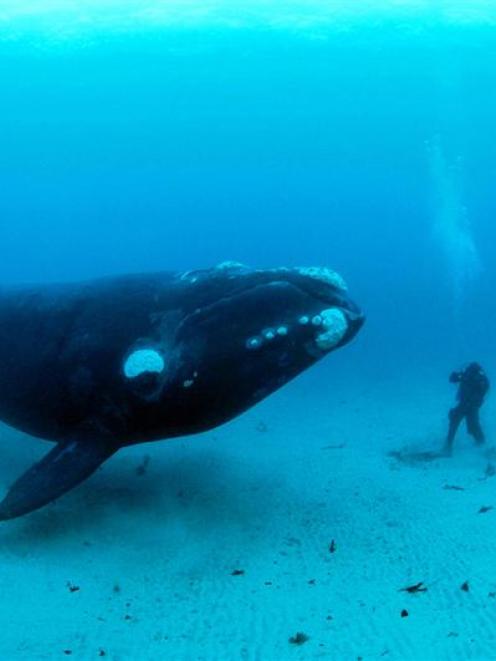 Skerry photographed the bus-sized whale - 14m long and 70 tonnes - investigating his dive assistant after the men had hitched a ride with a New Zealand research expedition to the Auckland Islands, aboard the Dunedin-based yacht Evohe.

This photograph won the Underwater World category of this year's Wildlife Photographer of the Year awards, the New Zealand Herald noted recently.

The expedition leader, Dunedin marine biologist Dr Simon Childerhouse, said that expanding southern right whale numbers at the Auckland Islands were increasing the likelihood of Dunedin and Otago people having their own close encounters.

Mating activity involving four of the whales off Taieri Mouth had been photographed by the Otago Daily Times in June last year, and the whales could be seen in the Otago Harbour.

Southern right whales, New Zealand sea lions and fur seals had been common on or near the New Zealand mainland coast before whaling and sealing operations nearly drove them to extinction in the 19th century.

After re-establishing themselves on the remote Auckland Islands, about 600km south of Dunedin, the three species were again returning to the mainland, Dr Childerhouse said.

Rough weather on the three-week trip to the Auckland Islands during winter last year had made life tough for Skerry, a National Geographic photographer, he said.

Every year, more than 200 southern right whales gather near Port Ross in the Auckland Islands to mate and calve.

Skerry and his assistant had a Department of Conservation permit, enabling them to swim near the whales.

"They're very agile for their size and very manoeuvreable. They're comfortable in shallow water, whereas most whales don't really like it," he said.

The "fantastic" photograph had highlighted the curiosity shown by whales.

"We focus a lot on people going to look at whales but in this [photograph] whales have come to look at us."