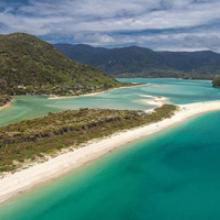 Parliament have honoured the 'buy a beach' campaigners. Photo: file

The Kiwis behind last year's campaign to buy an Abel Tasman beach have been honoured for their ``significant and lasting contributions to public access'' to the outdoors.

The pair helped raise more than $2 million through a high-profile Givealittle campaign last year to buy 7ha of private beach at Awaroa Inlet, which was then made part of the Abel Tasman National Park.

``Mr Major and Mr Gard'ner embody the spirit of the Walking Access Champion Awards, which recognise those who have made significant and lasting contributions to public access to the great New Zealand outdoors,'' Upston said at tonight's ceremony at Parliament.

Each year nominations for Walking Access Champions are sought from the public, in particular individuals and organisations who work with the New Zealand Walking Access Commission.

Other recipients announced at a ceremony at Parliament tonight included Robert Lange for gifting 53,000ha in Central Otago to the public, and Russell Hamilton who was working with Lange to create a track network on the land.

Rod Eatwell (88) the largest private landowner on the Queen Charlotte Track in the Marlborough Sounds, was also recognised.

``Mr Eatwell works continually to maintain his section of the track, including building a track to Eatwell's Lookout, which provides unparalleled views of the Sounds,'' Ms Upston said.

The Nelson Tasman Cycle Trust was recognised for its work over the past seven years to improve public access to the region. The trust developed the 38km Dun Mountain Trail and the 100km Great Taste Trail.

``Tonight's award recipients have all made important contributions towards enhancing public access across the country,'' Ms Upston said.

``I congratulate them for their achievements and their contributions towards enhancing the experience for everyone who enjoys New Zealand's outdoors.''

Te Araroa Wellington Trust, which created the popular Paekakariki-Pukerua Bay Escarpment Track on the Kapiti Coast which opened in April 2016. By the end of its first year, around 60,000 people are expected to have walked the track, which has also had a positive impact on local businesses.

Whareroa Guardians Community Trust which works to enhance public access on a significant section of land between Queen Elizabeth Park and the Akatarawa Forest Park on the Kapiti Coast. Since 2007 more than 50,000 plants have been planted by volunteers. The trust continues to work on projects across the farm, including restoration of native forest and wetland areas.