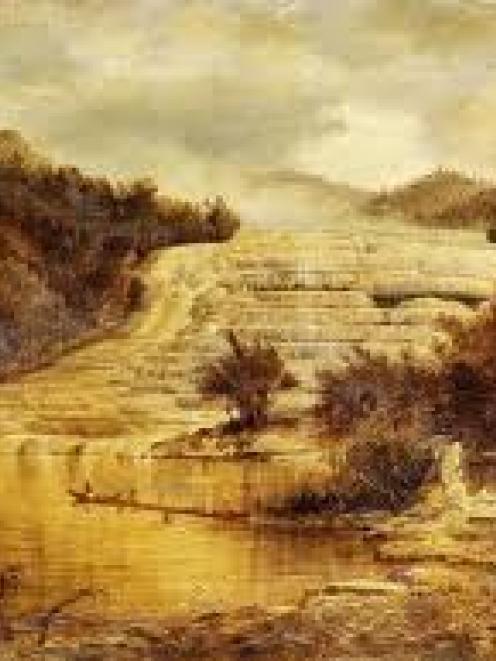 A painting of the Pink Terraces by Charles Blomfield.
The discovery of the remains of the famed Pink Terraces at the bottom of Rotorua's Lake Rotomahana is "huge", a scientist says.

The world-famous Pink and White Terraces were promoted as a tourism wonder before vanishing during the 1886 eruption of Mt Tarawera in the Bay of Plenty. They were thought to have been destroyed.

"I think it's huge," project leader Cornel de Ronde, of the Institute of Geological and Nuclear Sciences (GNS), told NZPA.

"The Pink and White Terraces were an integral part of New Zealand folklore, they were iconic and certainly for local iwi they are a big deal spiritually."

Scientists were overjoyed to find parts of the Pink Terraces: "They thought they were exquisite and couldn't believe the complexity of them," he said.

The terraces held cultural significance for the nation.

"It must be very strong in the psyche of what is a New Zealander . . . I think a lot of people would be very pleased to hear that they're still around," Dr de Ronde said.

The discovery was made this week during a joint New Zealand and American project to map the lake floor and investigate the geothermal system.

Two underwater vehicles collected side-scan sonar and bathymetric data, which showed crescent-shaped terraced structures in about 60m of water where the terraces were prior to 1886.

Scientists recorded water temperature, acidity, electrical conductivity, depth, and clarity, as well as mapping the volcanic rocks beneath the lake floor and indicating the types of rock.

The team found no sign of the larger White Terraces, after scanning the entire lake, but Dr de Ronde did not rule out the possibility they had also survived the eruption.

Lake Rotomahana is 115m deep at its deepest point, and the mapping located hydrothermal vents at the bottom of the lake.

The pink terraces were originally on the west bank of the lake and the white ones were on the north side, and researchers said there was possibility parts survived the eruption, particularly the white terraces which were protected from the explosion by a ridge.

At the time, they were the largest silica terraces in the world and represented an enormous flow of geothermal fluid into the lake from vents on land. Now they are thought to be covered by at least 50m of lake water plus an additional sediment layer of unknown thickness.

The project is a collaboration involving GNS Science, the Woods Hole Oceanographic Institute in the US, Waikato University, and the Te Arawa Lakes Trust Board.