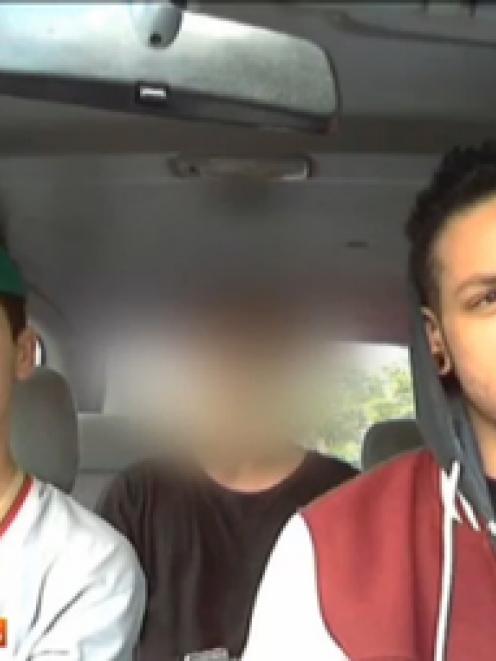 Two men who are allegedly members of the 'Roast Busters' Facebook group, who posted their sexual exploits online. Photo / 3News
Police were interviewing two men in relation to the "Roast Busters'' Facebook page this afternoon.

Detective Bruce Scott from Waitemata police told APNZ one of the men had voluntarily gone to a police station this afternoon.

He had previously refused to co-operate with police investigating the group, Mr Scott said.

Another man who had previously spoken to police was also being re-interviewed today.

Mr Scott said the case had been "vigorously investigated'' by a officers from the child protection team, and he didn't think there was any more police could have done to bring a case.

"We continue to look for evidence that will assist us in determining whether there has been any criminal offending and then once we've got this evidence we can make a determination on what our next move is.''

"Whilst we acknowledge it was upsetting for the victims, it was being monitored for information or evidence that would assist our investigation.''

Mr Scott that said to date, none of the girls contacted by police had given a formal statement or made a formal complaint.

He said police needed to be careful not to re-victimise the girls by pressuring them into making a statement.

"We continue to talk with girls involved in the group. The difficulty is that we don't want to re-victimise the girls, some of them don't wish to engage with us and we can't push them to talk to the police.''

He said there were several reasons why the girls may not want to make formal statements.

"They're fearful of the process, they're worried about their peer group, they're traumatised by what's happened to them and it affects them talking.''

Mr Scott said police would have pursued any potential charge they could have against the group, but there was no evidence to support any criminal charge.

He said police had "quite a lot of interaction'' with schools in West Auckland to keep them up to date and seek their assistance.

The schools had been "absolutely'' assisting police, but Mr Scott said he didn't know what, if any, action had been taken by the schools.

Earlier today, Labour's women's affairs spokeswoman Carol Beaumont said the group's exploits amounted to gang rape and that no action has been taken by police was "astonishing".

"Our police pride themselves on being proactive. Surely that could have extended to tracking these youths down and clearly signalling that what they are doing is not okay."

But the Law Society's criminal law convenor Jonathan Krebs said in this case, the police had their hands tied in not being able to lay charges against the group.

"Just because someone boasted on a website doesn't mean it's true and we don't want to start convicting on bragging.''

The worst thing police could do at the moment was to bring a prosecution that was a "bit loose'', Mr Krebs said.

"If one of these young ladies were to make a complaint to police, then I would have thought police would take that up and run with it.''

Ms Beaumont said the case raised broader questions around the way rape victims were treated and questioned what was being done to change the culture that meant teenage boys thought such behaviour was acceptable.

"It's getting up there in terms of unpleasant things they encounter.''

There was a concern that other young men would be inspired by the group's actions, Mr Cocker said.

There was not a lot that could be done to protect yourself from online predators, he said.

"The people who are targeted by these guys, they are victims in the true sense of the word, they have not done anything wrong.''

Prime Minister John Key said today the "disturbing and disgusting" behaviour of the group will be unlawful under a bill about to be introduced to Parliament.

"As a parent I find the issue very disturbing and abhorrent," he said at his post cabinet press conference this afternoon.

He was responding to a story about the young men on TV3 last night and the fact that police have said they could not take it further because no victim was willing to come forward.

"You are talking about youngsters who are at a very delicate age," he said.

He said that their practice of naming a particular young woman would be unlawful under a law the Government is about to introduce, the Harmful Digital Communications Bill.

"But it is actually a bigger issue and it is just extremely disturbing and disgusting behaviour and these young guys should grow up," he said.

He said it was very difficult to progress the issues if the victim was not willing to make a formal complaint.

"It is a very challenging situation for a young woman to put herself in that position. She would be subject to a full and open process and that's very challenging. They are very delicate years for these young girls so you can't blame them but it is also very difficult legally for the police to progress the issue without that."

Justice Minister Judith Collins foreshadowed the bill in April as a way to address cyber bullies. Included among the bill's measures would be:

• Making it an offence to send messages and post material online that is grossly offensive, indecent, obscene, menacing or knowingly false, punishable by up to 3 months imprisonment or a $2,000 fine.

• Creating a new civil enforcement regime that includes setting up or appointing an approved agency as the first port of call for complaints.

• Allowing people to take serious complaints to the District Court, which will be able to issue sanctions such as take-down orders and cease-and-desist notices.

• Creating a new offence of incitement to commit suicide, even in situations when a person does not attempt to take their own life, punishable by up to 3 years imprisonment.