Prince Harry: A pool king and court jester all in one 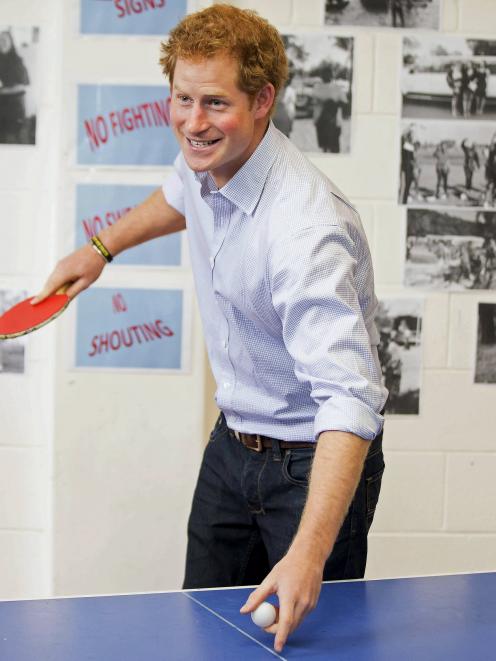 The 30-year-old painted his hand purple to make his mark on a wall at the Turn Your Life Around Trust for at-risk youth in south Auckland when he dashed across the room towards photographer Arthur Edwards.

Harry plonked his hand on Mr Edwards' head leaving him with a bright hand print on his face. "You know why I did that," Prince Harry said, while laughing.

The room roared with laughter as Harry cheekily wiped his hands clean from paint.

He had just finished playing pool, table football and ping pong with teenagers from the centre and was pictured jumping around enthusiastically as he played.

He apologised to the young people there, who were all smiling and laughing at the disruption.

TYLA is a youth development programme that works with children, young people and families to reduce and prevent youth offending.

The programme works with the police, to target intervention of offending and to manage the cases of young offenders with their families and community. Children from ages 9 to 17 can be referred to TYLA.

General manager of TYLA Anastasia Meredith said she was blown away when she was told Prince Harry would be coming for a visit.

"I couldn't believe it, we are a small community, a small charitable trust, and someone like Prince Harry wants to come to our hood and hang out with our kids."

She said some of the young people in TYLA didn't know who Prince Harry was before they were told.

"We showed them some clips of him in the army, with the queen, and with his brother's family," Ms Meredith said.

"They're really excited... That he wanted to come to Otara is really cool."

Prince Harry was forced to make an outfit change before arriving at the centre after rain poured down and drenched him during an earlier visit to Southern Cross Campus School.

He quickly swapped his professional blue suit for a black jumper so he could continue his official duties during his first day touring Auckland.

Having just been drenched in the rain, Harry walked into the school hall and playfully shook the rain off his blue suit to the delight of students.

He then traveled to the Auckland Spinal Rehabilitation Unit at Middlemore Hospital where several wheelchair-bound former rugby players had gathered to meet him.

Harry was met at the hospital by two former All Blacks, Sir Colin Meads and Tane Norton, and veteran hooker Keven Mealamu as patients completed their rehabilitation for the day. The rehabilitation unit is supported by the New Zealand Rugby Foundation.

Things will then get more formal for the prince on Friday afternoon when he holds official audiences with Labor leader Andrew Little and Prime Minister John Key.

Prince Harry will round out his day's engagements with a Government House reception hosted by Governor-General Sir Jerry Mateparae to recognise emergency services.

Most of his Auckland fans will have to hold out for the chance to meet him as there's no walkabout planned until tomorrow.

His appearances on Friday begins to wind up his week-long tour of New Zealand. He heads back to the UK tomorrow, where he'll finally get to meet his new niece, Princess Charlotte.