Problems in the wash 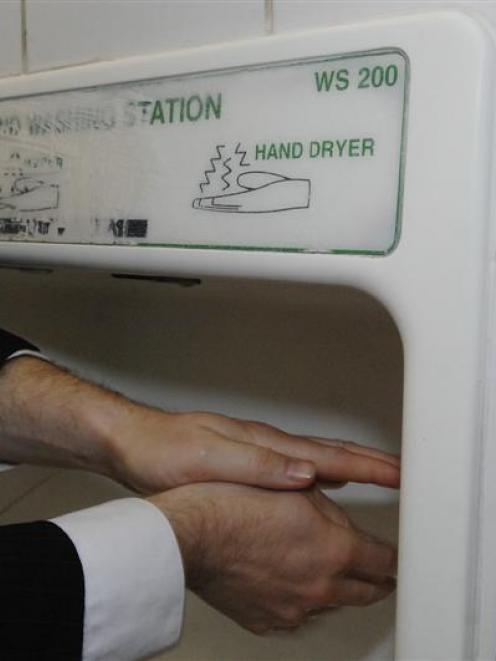 Recent norovirus outbreaks have prompted health officials to emphasise the need for thorough hand washing to help prevent the spread of disease, but are we getting the message?

What is the message? Is it possible to carry out adequate hand washing at all public toilets? Health reporter Elspeth McLean gets her hands dirty to discover hand washing may not be as simple as it seems.

By now, most of us may have heard about singing "Happy Birthday" when we wash our hands. Two verses are required, apparently. That takes about 20 seconds. Then we should spend another two verses worth drying our hands. Simple enough. But how many of us do it?

Is what many of us do - dreamily squirt a bit of soap on to a palm and gently rub our hands together under warm water and then quickly dry off the worst of the water - good enough to prevent the spread of anything? Probably not.

Some Dunedin public toilets offer only cold water - no soap or drier - for hand washing and at least one toilet has nothing for cleaning hands.

The public toilet at Te Rauone reserve on the Otago Peninsula has no hand basin, the Otago Daily Times discovered, in an informal survey of some public hand-washing facilities.

Two other public conveniences on the peninsula were also less than ideal, offering cold water and air driers, but no soap.

One was the male and female toilets at the Macandrew Bay Hall and the other was the unisex exeloo beside the beach at Broad Bay.

Several of the places identified as being poor for hand-washing were areas where families may gather for recreation and picnics.

Among them was the Woodhaugh Gardens toilets where there is only cold water and no drying facilities.

Marlow Park, on John Wilson Ocean Drive, has cold water and hand towels, but no soap, while the changing rooms and toilets beside the car park at St Clair beach have only cold water.

A nearby unisex exeloo has cold water, soap and a hand dryer.

The Dunedin City Council is well aware of the shortcomings of many of its public toilets, having carried out a review of them since 2007, and adopting a 10-year plan in September which would involve spending several million dollars to add some new facilities, and refurbish and replace some old ones.

This plan includes upgrading toilets on parks and reserves, where practicable, to an agreed standard.

The plan includes redeveloping the St Clair facility, which has been among the public toilets subjected to regular vandalism, and investigating potential funding for a Marlow Park development and renewal of the Broad Bay toilet.

Council parks and reserves team leader Martin Thompson said the Te Rauone toilets had been identified in the Otago Harbour reserves management plan, and funding had been included for council's consideration in 2009-2010.

One of the difficulties in providing toilets in remoter areas was the risk of vandalism, including damage to water supplies.

So what should people do in the meantime, if they have to use a public toilet where there is no soap or anything for drying hands? Dunedin City Council senior environmental health inspector Judy Austin suggests carrying a small bottle of hand sanitiser (at a cost of around $3) could be a solution.

It was small enough to be popped in a handbag or pocket or carried in a car glove box. It could be used in those situations where there was no visible dirt on the hands.

Smokers needed to be aware of the risk of lighting up soon after using it as the alcohol could ignite and burn hands or the face.

Cold water and soap would clean hands adequately, but warm water was considered better because it encouraged people to wash for longer.

One of the most common faults with hand washing was people not drying their hands properly, the water then providing a growth medium for unwanted micro-organisms.

Ms Austin prefers single use hand towels because air driers are so time consuming people get impatient and do not do the job adequately.

Toilets visited by the Otago Daily Times in a variety of restaurants and bars all had adequate hand-washing and drying facilities.

Ms Austin said it was rare to get complaints about front-of-house toilets.

• After using the toilet

• Before, during and after the preparation of food

• When hands are dirty

• More often if someone is sick

Source: Ministries of Education and Health