Rebates for buyers of electric cars, petrol car buyers to cop it 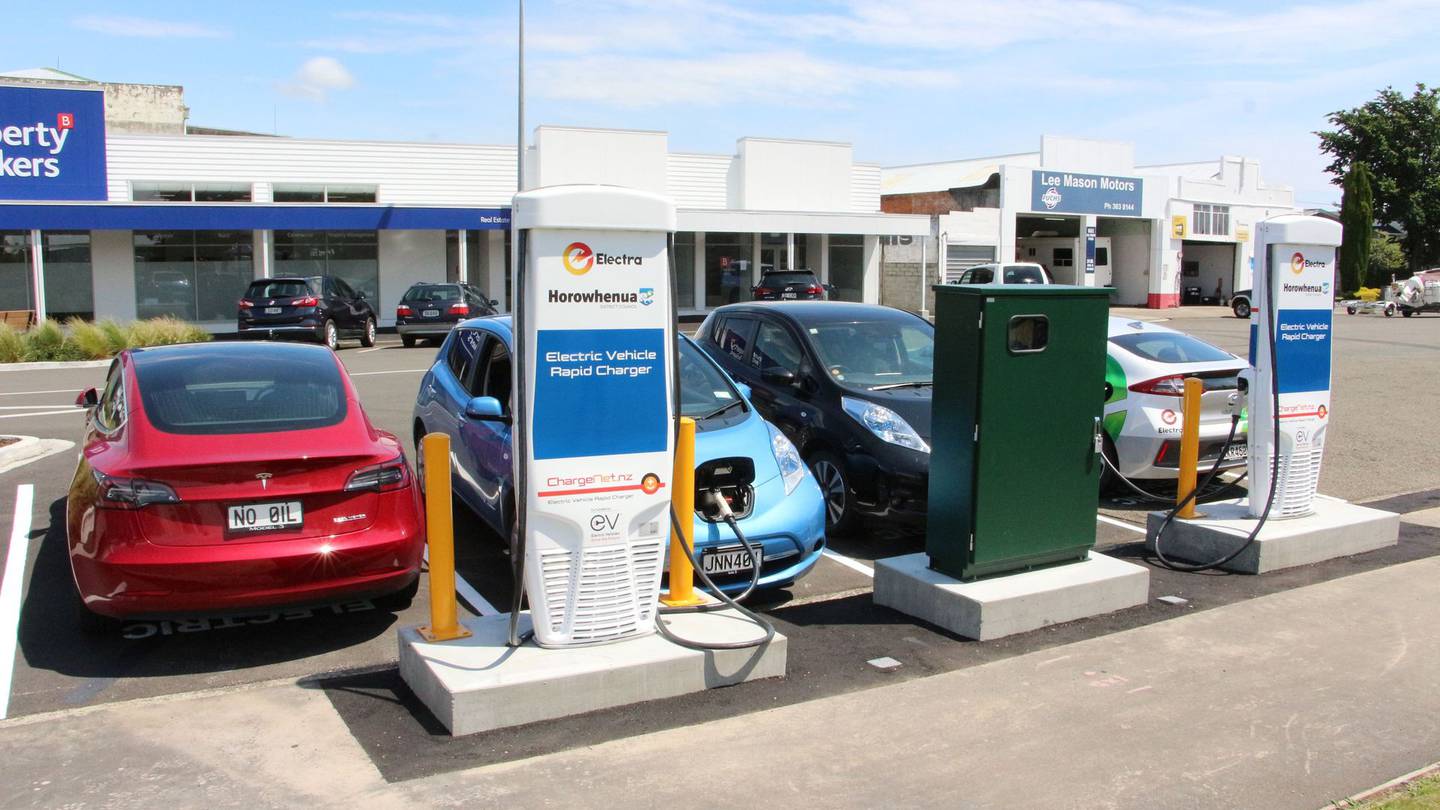 Electric cars at a charging station. File photo: NZME
Drivers who buy new cars from July 1 will be able to get taxpayer-funded rebates of almost $8700 a new electric or plug-in hybrid car, and about $3500 for used cars.

But those who buy petrol vehicles will cop the cost under the Government's plan announced today – from January 2022, buyers of new petrol cars will have to pay a fee of up to $5875, while those buying newly imported used cars face fees of up to $2875.

Petrol cars with lower emissions – such as a Toyota Rav 4 or Suzuki Vitara – would not face fees.

The measures were announced by Transport Minister Michael Wood and Climate Change Minister James Shaw today, and are a rejig of the controversial 'feebates' scheme which was scuttled by NZ First last term.

Rebates of up to $3450 will be given to those who buy used electric cars and $2300 for plug-in hybrids. From January, smaller rebates will also be offered to buyers of other low emission cars.

Fees on higher emitting vehicles will start from 1 January 2022.

Wood said they would not apply to cars which were already in the country, which meant low-income families who relied on cheaper second-hand cars would still be able to get them.

Wood said New Zealand's uptake of electric vehicles was well behind that of most other countries.

"Our monthly registrations of EVs are around half the global average and sales are well below the 50 percent of monthly sales seen in some European countries."

Wood said a discount on low emission vehicles funded by a fee on higher emitting vehicles was the best way to persuade people to invest in electric or hybrid cars.

"It's a common policy overseas, a recommendation of both the Climate Commission and the Productivity Commission, and is supported by the likes of the Motor Industry Association – it's time to get moving with it."

The funding was set aside in the Budget and is part of the Government's efforts to push down transport emissions, which currently make up almost half of all New Zealand's emissions.

A spokesman for Wood said the scheme was designed to be fiscally neutral, so the fees covered the cost of the rebates. A Crown loan would cover the cost of rebates in the first six months until the fee began.

Last week's Climate Commission report recommended banning imports of petrol and diesel cars by 2035 at the latest, and a boost in the proportion of biofuels used in New Zealand.

The Government was also consulting on a Sustainable Biofuels Mandate, which was aimed at further developing New Zealand's biofuels industry and reducing emissions from cars, trucks, ships and planes by 1.3 tonnes until 2025, while zero emission policies were worked through.

An electric vehicles advisory group would be set up soon to advise the Government on policy.

So we can now look forward to our vehicle fleet getting even older. Well done.

Before you know it David, we'll all be driving pedal cars! Then we can use the cycle lanes......

All this for a small island nation that contributes 0.3% towards global warming!

I suggest the government spend some of this 'never-ending' supply of taxpayer money on lobbying China to reduce their MASSIVE impact (28%) of CO2 emissions. or is that in the too hard basket?

Good luck, most of the world's cheap steel comes from China, hence there big reliance on coal to turn iron ore to iron then steel. Which then gets turned in to the cheap goods we like to buy, including electric vehicles.

This is being FORCED upon us way, way too soon. Like self-driving cars (remember them?) electric vehicles are NOT the future. Less than 2% of new car sales in the US alone are electric. And we here, emit less than 1% of global emissions. Air New Zealand is one of the country's largest climate polluters, emitting more than 3.5 million tonnes of carbon dioxide into the atmosphere every year.
Green Hydrogen is the future, look at the new Toyota Mirai just last week setting a new world distance record; over 1000km on a tank of hydrogen. Being forced/penalised into this, is beyond reproach.

The Ardern govt is angling to be next in line in a desperate attempt to be seen by world leaders 'as a example of a country leading the way for a greener tomorrow'...Surely a hangover from David Lange's 'nuclear free' stance and Helen Clark's involvement in the useless United Nations. Labour DO love their moment in the international spotlight!

Delusions of grandeur appear to be the goal of most Labour leaders these days. No matter the economic pain and suffering this places on taxpayers!...Ever feel used?!

Totally agree with you Snozzman. I'm almost embarassed to say I voted in this Labour govt. This is a totally knee jerk reaction that will only see the upper classes funded by the lower classes. Petrol cars will be taxed to hell, while the well soled are funded and rebated into $50k EV's. As for those thousands of people on low wages in rural areas all over NZ.......what choices do they have?

Yep, Green Hydrogen is the way to go, infrastructure at Tiwai Point and Manapouri is begging to be used to produce it. Adapt existing I.C.E. vehicles to use it, until fuel-cell vehicles like the Mirai become more commonplace. No fighting over EV recharging stations and long waits.

"Green Hydrogen is the future, look at the new Toyota Mirai just last week setting a new world distance record; over 1000km on a tank of hydrogen."

The test started at 05:43 and, according to the video, ended at 03:59; some 22 hours later. That indicates the 1003km travelled was done at an average of 45km/h. To give a more local idea, that's about the same distance as the Wahine Memorial Park (Wellington) to the Houhora Heads Holiday Park (north of Kaitaia) which takes around 13 hours according to Google maps.

While Toyota does say they used "eco-driving" to achieve this result, they don't go into any detail on what this actually means. If they did the same thing as Hyundai did in Australia with their H2 vehicle then they deliberately kept their speed low; well below the speed limit for the road.

I agree about hydrogen. If all the world's cars suddenly became electric, the national electric grids could not take the surge. Anyway, why would I want a car which has limited mileage and no heater? (oh they have heaters, but you lose at least 40% of your mileage)
Norway has the biggest percentage of the world's electric cars, and their resale value is at rock bottom; Norwegians are sick of freezing.

Must have at least a 3 star safety rating. We should not be bringing ANY car into the country at less than 5 star. This is incompetence at its worst.

More waste of taxpayer money ,more tax imposed on everyday people for labour lead government, that have never lived in the real world , it's getting close to imposed communism

Let alone the continued mining of Cobalt and Lithium and the production of plastics and steel to manufacture the so called planet saving EV's!
EV's on their own are not the answer. It will take greatly improved technology, and a range of propulsion solutions. History tells us that all eggs in one basket isn't a solution. Which is exactly why we face the problem of emmissions with the internal combustion engine. I would have thought a country as ours, with the knowledge gained and shared, that we would see past ONE solution. Especially as it not only further segregates a poorer demographic, it still adds significantly to enviroment damage and climate change. For a start, how much heavy fuel oil gets burnt delivering EV's to NZ, let alone the resourses consumed making them.
Surely, it would make much more sense to limit imports and encourage better maintainance and care of what we already have in our fleet. Trouble is, we treat cars and driving as an endless consumable product of convienience rather than a privilage of modern life. There was a time when households took pride and care in what they had. These days we change our cars in a heart beat and drive like we stole it!

It won't matter how the subsidy is applied. We will all pay and pay and pay for the subsidy through our taxes.
Nothing will be achieved by introducing cars that cannot deliver the same performance by way of the power and range of current petrol and diesel cars and trucks and buses.
Electric cars will always have a huge drain on the power system and distribution of greater power capacity will be problematic.
Higher cost of electricity will also be discouraging and not affordable for lots of people.
Electric car range will always be a problem.
Shifting very heavy loads as we do efficiently with diesel vehicles now will not be possible via battery driven vehicles.
Many more problems will arise because the whole idea of everything being driven by "freely" available electricity from wind and solar machines and hydro is poorly thought out and unrealistic.

I thought this Government said there would be no new taxes.
This system is a tax and wealth redistribution process.
Not good for someone on a farm that has to buy a diesel or large capacity petrol 4X4 for work and pay extra. That extra payment then goes to an urbanite to buy an electric car.
Yet another impost on rural communities and farmers, in particular.
The only thing this Government seems able to complete is raise taxes and attack democracy by appeasing of activists.
Everything else they say they will do such as solve child poverty and housing issues, fails.
I'd say this Government will go down in New Zealand history as the worst government we've ever had. On any number of measures.

Considering Indonesian coal is used to produce the shortfall of current electricity demand, these vehicles will be the dirtiest emitters of all.
Increasing electricity demand without first addressing the supply issue is madness.
Importing coal while still needing it to top up electricity production is madness.
Limiting gas exploration while still needing coal is madness.
Building 'renewable' power generation before addressing the CO2 emissions of the materials used in their construction is madness.
Agreeing to limit our emissions while also agreeing that others increase theirs is madness.
Claiming brownie points when actually making the situation worse is egotistical virtue signaling on a grand scale.
The ridiculous price of housing is because of successive governments not dealing with the reality, that it's their policies that is creating the problem.
Now they are meddling with energy, expect the same result.