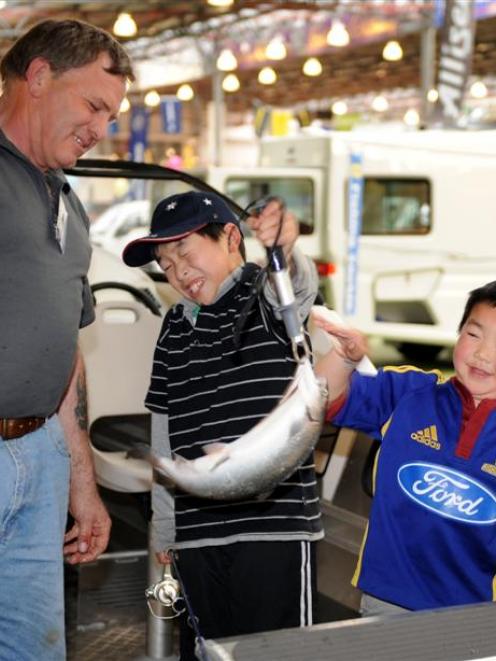 Canterbury Sports Fishing Club's Ray Eade watches as James (10) and Jacob Yee (5) hold a live salmon at the Otago Boat and Outdoor Show at the Edgar Centre. Photo by Stephen Jaquiery.
With cries of "reel it in", Jacob Yee urged his younger brother on as they caught their first salmon yesterday - but it was an experience that very nearly did not happen.

In a first for the Otago Boat and Outdoor Show, children are being given the opportunity to catch live salmon from a tank.

The concept worked successfully in Christchurch for the past two years, with help from the fire service, which filled the tank with the city's spring water.

Canterbury Sports Fishing Club spokesman Ray Eade said members did not give the water a thought when they had the tank filled in Dunedin and did not realise until too late that the city's supply was treated with chlorine - a chemical salmon dislike.

Many of the salmon died as a result but, as they were able to be eaten, some were sold to local restaurants.

Organisers then brought water in from Speight's Brewery to fill the tank and released a new batch of about 100 farmed salmon from Tekapo, which found the spring water much to their liking.

It was a relief to Mr Eade, who said it was amazing to see the smiles on the faces of children when they successfully hooked a fish.

The show, held at the Edgar Centre every two years. features stalls covering most aspects of marine and outdoor living, including boats, caravans and electronic gear.

It continues until 6pm tomorrow.