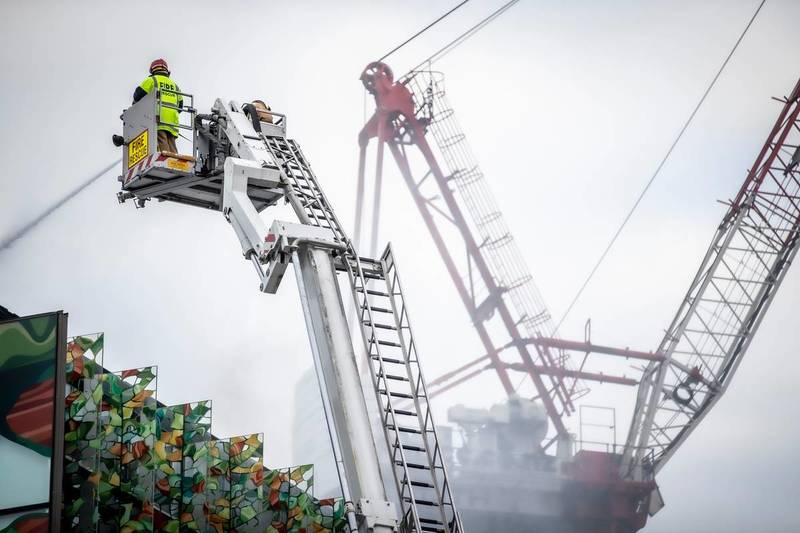 • Hot spots still flaring at convention centre roof, carpark 'underwater'
• SkyCity convention centre rooftop about 85%  burned through
• At the fire's peak, 130 firefighters were battling the inferno, which has been burning since 1.15pm on Tuesday
• Inner-city workers face another day of traffic disruption, several streets still closed

Crews are now into their third day dealing with a massive blaze at the construction site, which began at 1.15pm on Tuesday.

Earlier today, Fire and Emergency NZ said the roof area, where the fire began, was under control and merely "smouldering" . But just before 2pm black smoke again filled Hobson St and minutes later flames could be seen on the roof.

Officials refused to speculate on how the fire started, but workers said they believed an unattended blowtorch could have ignited the straw-like acoustic layer, quickly spreading to the roof's bitumen membrane.

A priority is to protect the sides of the building not already damaged.

Fire and Emergency area commander Richard Twomey said crews have been using drones to look for hotspots, but said: "We're in a better place than yesterday''.

However, firefighters were "a bit fatigued''.

"It's just tiring. One of the challenges is that we keep rotating our staff as much as we can''.

Listen to Incident Controller, Richard Twomey and Inspector Scott Gemmell, who provide an update on the current status of the Auckland SkyCity Convention Centre fire and the cordons in place. @nzpolice pic.twitter.com/1OWokj8gFJ

Firefighters have been working tirelessly to quell the fire, with several taken to hospital as a result. Yesterday one was moderately injured after being struck by a piece of falling roof, suffering a concussion.

The fire has left a haze of smoke over Auckland's CBD, with many buildings in the immediate vicinity closed again today due to the air pollution and traffic disruption.

Windy conditions in the city are helping the smoke dissipate, but also appear to be fanning minor flare-ups.

Firefighters have used 26 million litres of water trying to quell the blze, according to Watercare. Dozens of cars still in the basement are likely ruined, with water up to the windows.

Auckland Council's Safeswim manager Nick Vigar said about 1.5m of water was in the carpark, affecting about 100 cars. The water was being pumped out due to the risk of the contaminated water rising further.

Fire and Emergency was also working hard to ensure any run-off from water used to fight the fire was minimised, and Auckland Council and Watercare were monitoring this as the emergency continued.

SkyCity said it would fully compensate employees for any damage to their vehicles. 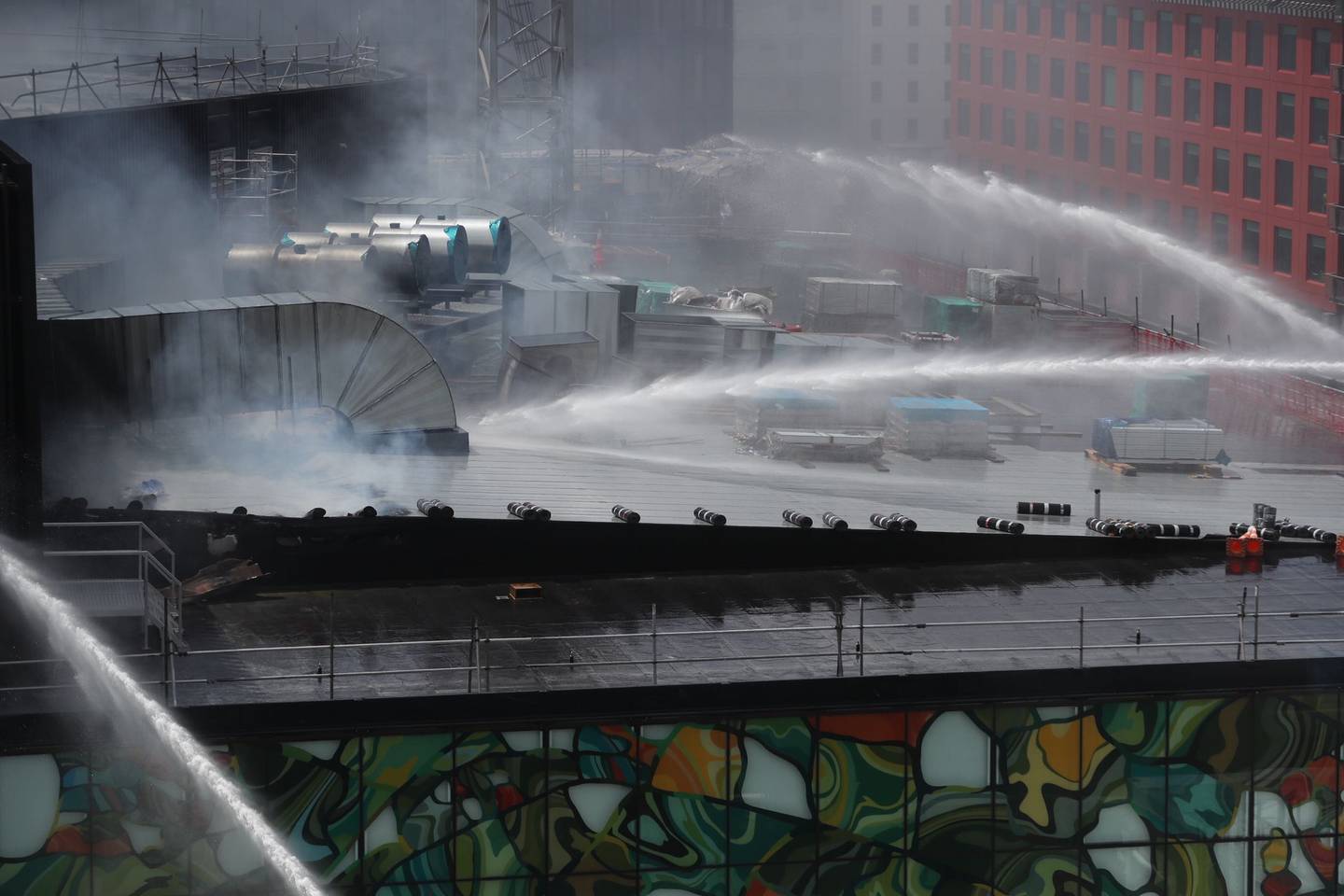 Firefighters are continuing to douse the roof of the Convention Centre. Photo: NZ Herald

Part of precinct to reopen

SkyCity Entertainment says it will reopen parts of its Auckland precinct later today as it takes a phased approach to resuming normal business.

"Fire and emergency services teams will remain on site until such time as the fire is successfully extinguished and the site can be handed back to Fletcher Construction," Sky said in a statement.

Fletcher is the lead construction contractor on the convention centre and the adjacent Horizon Hotel.

SkyCity says once the extent of the damage is known, it and Fletcher will be able to determine the impact on how long it will take to complete the project "to the standard agreed with the New Zealand Government".

The project was supposed to have been completed by the first quarter of this year but, until the fire, that had been pushed out into the second half of 2020 and SkyCity has withheld $39.5 million in liquidated damages. Fletcher's liability for liquidated damages on the project is believed to be capped at about $40 million.

A construction law expert says the SkyCity fire could lead to a raft of legal issues.

But he said there’ll also be issues about keeping workers on-hand until the construction is back up and running. 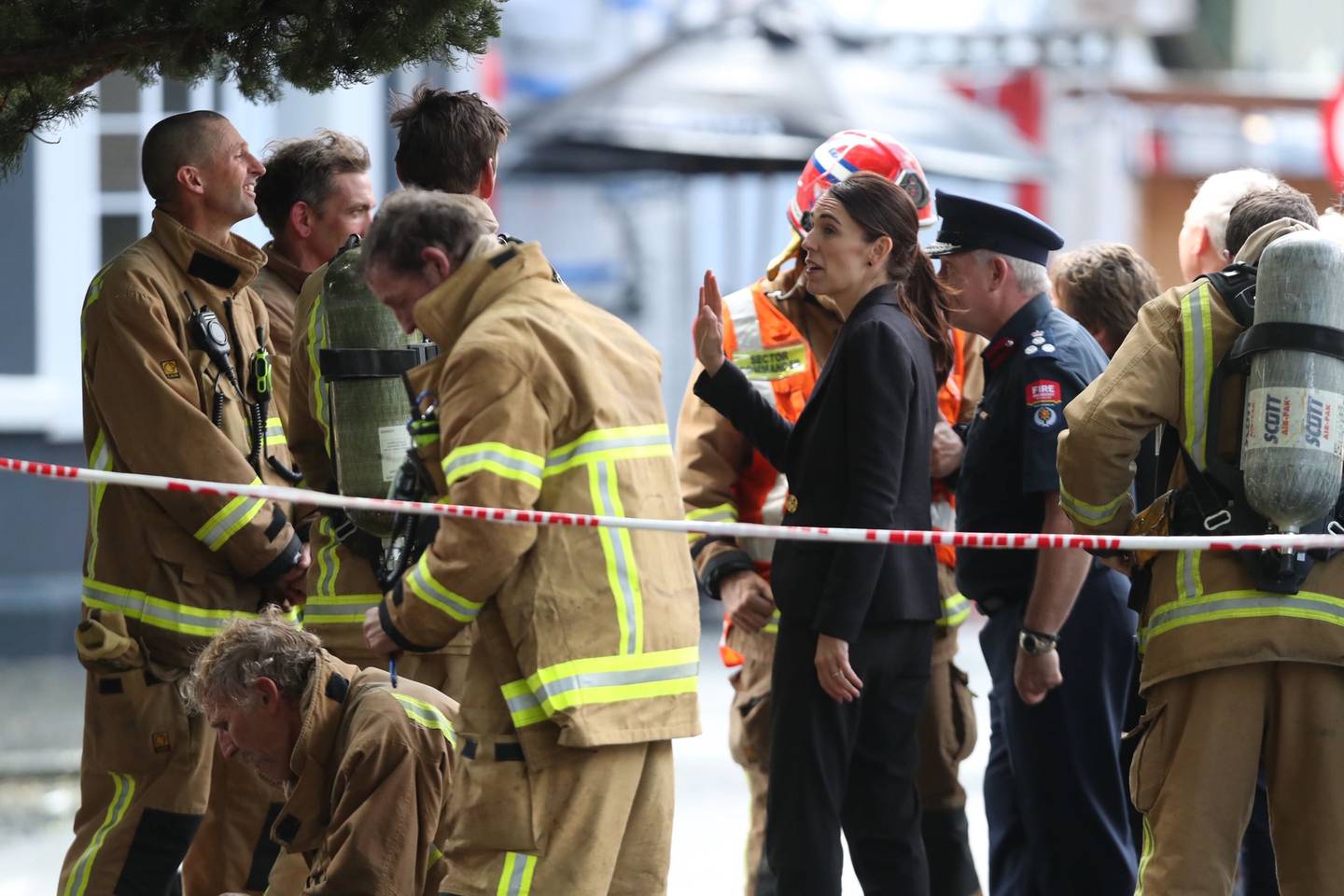 Prime Minister Jacinda Ardern, who visited the site yesterday, said she wanted to acknowledge the firefighters who had been working under difficult circumstances.

SkyCity chief executive Graeme Stephens said he hoped staff working on the convention centre project would be back at work tomorrow.

Stephens and Fletcher Building chief executive Ross Taylor were adamant that the centre would eventually open, although no timeframes could now be given.

"It was an amazingly iconic building yesterday and will be again.

"We will get the phoenix out of the ashes," Stephens said.

Ardern said Apec 2021 would still be held in Auckland, but the venue was a point of discussion for Government.

"New Zealand has hosted Apec before ... without a convention centre. We had contingency in place."